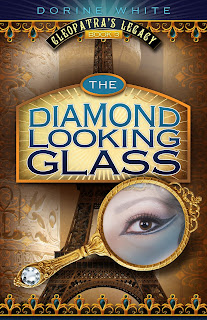 Beauty and the Beast. The world knows it as a cartoon with dancing teacups and broomsticks. To twelve year old Claire La Fleur, it is family history, and the power behind Belle’s mirror is real. Every ten years her family gathers to see if the mirror will awaken, and for the last two hundred years it has slept. This time, Claire’s touch awakens the magic within the diamond looking glass, a direct portal to the past and a way to communicate with Cleopatra, the last pharaoh of Egypt. The lure of power brings with it many perils, and a betrayal close to home thrusts Claire into a treacherous underworld. To protect the mirror, she travels into the Louvre museum in the dark of night, searches abandoned subway tunnels, and walks the catacombs of the dead. Welcome to Paris, France - where danger follows in every step.

This is the perfect series for younger readers who are aching for adventure and mystery. With just the right balance of history and magic, boys and girls will be equally drawn into these fun and exciting stories!

EXCERPT:
Claire looked up at the clock. The second hand seemed to creep around it in slow motion, and the five minutes left until the end of the school day dragged on. She looked down at her history handout. Instead of answers, she’d drawn pictures. If any of the other students saw her page, they’d laugh, amused that Claire still liked fairy tales.
La Belle et Le Bête.
Beauty and the Beast.
The world knew it only as a fairy tale from a famous animated film. To twelve-year-old Parisian Claire La Fleur, it was family history. This weekend everybody in the family would be remembering that history, from the great-aunt three times removed, to the cousin nobody had heard from in a decade. This was the weekend of the reunion, the time of the choosing. And Claire could now participate.
A small piece of paper hit her in the cheek. She looked up, and Pierre nodded his head toward the teacher, but his hint came too late. Claire had been caught not paying attention.
“Mademoiselle Claire,” said Professeur LeBlanc. “Would you like to share the answer with the class?”
Claire squirmed in her chair and then looked at Pierre for help. He gestured at the whiteboard. Claire’s eyes scanned the teacher’s notes. The words “Ancient Egypt” were scrawled across the gleaming surface, but she had no idea what the teacher had asked.
“Anyone?” he questioned, turning from Claire with a frown.
A hand shot up in the front of the classroom.
“Oui. Yes, Margeritte?” the teacher asked.
Claire clenched her teeth in an attempt not to groan. She should have known that Margeritte would jump on the question. The two were running neck and neck in becoming premier étudiant, first student, among twelve-year-olds, and Claire knew if she let her guard down even a little, Margeritte would catch up.
“The land of the dead was ruled over by Osiris,” stated Margeritte.
“Oui,” said Professeur LeBlanc.
Just then the bell rang. Darn it! Why hadn’t it rung one minute earlier? Then Margeritte would not have scored the class point, Claire thought. She scuffed the toes of her shoes against the floor.
“That’s not like you,” said Pierre. He stood in front of Claire’s desk, waiting for her to gather her things.
“I know. I know,” sighed Claire. “This weekend’s got me freaking out.”
Pierre ran his hand through his brown, wavy hair, moving strands out of his gray eyes. “You’re lucky you held it together until now, or your perfect grades would suffer.”
“They’re not perfect. They’re just good.”
“You’re the top student in the class,” said Pierre. “Call it what you want.”
“Well,” said Claire. She picked up her books and stuck them into her satchel. “Margeritte scored big with her answer.”
“Only because you spaced out.”
Claire winced. “Come on. Let’s go.”
Posted by Laurisa White Reyes at 12:00 AM