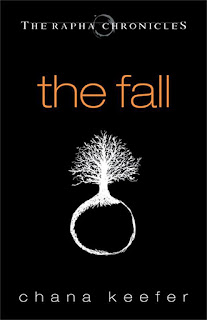 What is THE FALL?

The Fall is a fictional account of the fall of Lucifer and the events that follow told from the viewpoint of an angel named Rapha. The author, Chana Keefer, is a devout Christian, wife & mother, and a talented author. This debut novel is both passionate and direct, a story of the very root of the age old conflict between good and evil.

Below is the book trailer for The Fall, as well as an excerpt from the book. I will be giving away a copy of The Fall to one lucky reader. Winner will be drawn on December 15th. To enter, simply fill out the rafflecopter form below.

Chapter One - End of an Age

There was a time they were best friends…a distant memory almost forgotten.  Almost.
It would be so much easier if he could forget.

Peace, peace, but there is no peace…Rapha clutches his head in his hands oblivious to the rare trace of fresh air and woodland noises around him, too lost in fractured, tortured memories.

A child’s eyes, wide with fear; a woman’s ripe belly, torn; screams and cries of anguish splitting the darkness of night; innocence lost; purity destroyed; life swallowed in death.  And weaving through every image, the sound of cruel laughter—feasting on mankind’s pain.
That face.  Rapha squeezes his head but the image burns clearer—a face bathed in shadows as fumes of death cast waves of beauty and horror, eyes of leeching evil.  Those eyes suck him into darkness, willing him to join the nightmare.

With all the force of his formidable will Rapha wrenches his thoughts from that realm, forcing his eyes open to light and life.  A flower—tiny, bright, thriving no more than a few brave hours—faces the sun’s feeble light.  With a need for comfort, Rapha stretches face down, breathing in soil and weakly pulsing life.  Although fires burn, smokes of destruction rise and death reigns, here is a patch of green.  His fingers grip deep into soft earth as fresh pain rips through him.

“I cannot,” he gasps, wrestling in his mind with an unseen companion. “It’s impossible.  He’s gone too far for too long.  There’s nothing, nothing pure—he’s made it so….” Rapha’s body writhes like a tortured serpent, with agony greater than he’s ever experienced, threatening to rip his immortal soul from his impervious body.
But wait.  There was a time he tasted deeper anguish.

No.  Please.  That is locked away—eternal sanity demanded it.  But the horrific images descend once again.

The loved one weeps in agony, precious flesh is torn over and over as Rapha’s heart feels every rip of the whip, every trickle of spittle, every curse thrown like a poisoned spear.  And there, in the crazed mob, everywhere he looks, the twisted, beautiful, triumphant, mocking face of one who was once a brother.
Rapha’s earth-crusted hands clutch at his ears but the laughter grows, filling every recess of his soul, stealing every hope and joyful memory.

In a flash Rapha is there; catapulted through eons of space and time, before the purity of the garden, back through countless ages to a fresh hilltop lit by a younger, more optimistic sun.  He and Luc preferred the plunging cliffs dropping to unseen depths below.  Somehow, a spiral dive carried more of a thrill when performed in a temporal world.

“There’s something about this place,” Luc’s eyes flitted from tree to mountain and stream as he stretched golden arms wide as if to embrace the early morning’s glow filtering through droplets of mist.  “It’s not as grand as our flawless, hallowed domain but the appeal is undeniable.”

Rapha had ignored the note of restlessness in that melodic voice, choosing to enjoy fresh air laced with flowered perfume and the spiced musk of fertile soil.  In the countless years of their friendship, he had learned Luc’s passions could flash with the slightest provocation, but usually, if Rapha allowed Luc to give vent to his emotions, the darker frame of mind would pass.  And, a visit to this, their favorite retreat, was usually the perfect remedy, a change of pace and a different rhythm that put celestial matters into perspective.  With a sigh Rapha settled back into thick green with one arm behind his head to contemplate the crisp blue above.  Yes.  This was just what Luc needed, a deep breath of contentment.