THE STORYTELLERS - My newest book is out! 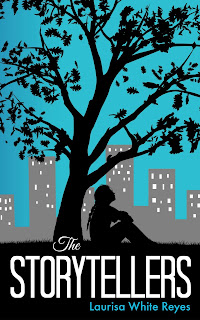 
12-year-old Elena Barrios' father has AIDS, a new disease in 1991 with a 100% fatality rate. Rather than face certain ridicule and ostracism, Elena tells her friends anything but the truth, fabricating stories about her father being a writer and researcher. But the reality is that Elena resents her father's illness and can't face the fact that he is dying.

When she is befriended by a named Ang, who tells stories about her own father, Elena is transported into these stories, allowing her to experience them first hand. With Ang's help, Elena gains the courage to stand up to the bully at her school, mend her relationship with her father, and finally say goodbye.

NOTE FROM THE AUTHOR:

THE STORYTELLERS' journey began more than twenty years ago when I worked as an office assistant at Huntington Memorial Hemophilia Center in Pasadena, CA. In addition to treating children with leukemia and patients with hemophilia, the office also treated HIV and AIDS patients. At the time, in the early 90s, AIDS was death sentence. The doctors for whom I worked were some of the leading researchers in the field, searching for a treatment that could extend life expectancies and improve the quality of life of AIDS patients.

One morning, a family arrived at the center--a father and several young children. They all looked rather sad. Later, I learned that they had lost their mother to AIDS and now the children were being tested for it. It broke my heart.

Those early years of AIDS were wrought with fear and ignorance. Patients were often ostracized and quarantined because the public was so afraid of contagion. Victims of AIDS were also stigmatized, especially those who were gay. I won't mention here the things I heard said about them at the time, but it was pretty awful.

Times, thankfully, have changed. Not only are treatments effective in managing the disease, but the fear and stigma once attached to it are no longer as prevalent as they once were. For many years, I wanted to write a story capturing some of that history--so that the current generation might understand what things were like in our not-too-distant past,  and that they might think twice about allowing such discrimination to exist in our present and our future.

I began writing THE STORYTELLERS nine years ago. In those years, I have re-written it at least a dozen times. I have received very positive responses from many corners, but the one issue that seemed to stand in the way of its publication was the 'AIDS issue.' I was told, understandably, that the discrimination described in my book isn't an issue anymore, so why write about it? Why share this particular history with today's children?

I have to ask this question in response:  We no longer practice slavery, so why write books about it? The Civil Rights Movement happened decades ago. Kids today don't have the same prejudices as their grandparents did, so why bother teaching the present generation about the past?

We write about the past because, 1) Those who do not learn from the past are destined to repeat it; and 2) To fail to record our history, however black it might be, is to fail to progress toward something better.

So, I present to you THE STORYTELLERS, asstory that means a great deal to me, and one that I truly hope will make a difference somewhere to someone. Enjoy!