BOOK REVIEW: SALT TO THE SEA by Ruta Sepetys 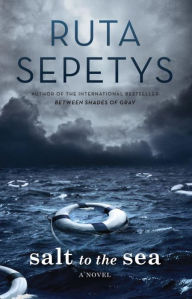 
World War II is drawing to a close in East Prussia and thousands of refugees are on a desperate trek toward freedom, many with something to hide. Among them are Joana, Emilia, and Florian, whose paths converge en route to the ship that promises salvation, the Wilhelm Gustloff. Forced by circumstance to unite, the three find their strength, courage, and trust in each other tested with each step closer to safety.

Just when it seems freedom is within their grasp, tragedy strikes. Not country, nor culture, nor status matter as all ten thousand people—adults and children alike—aboard must fight for the same thing: survival.

Told in alternating points of view and perfect for fans of Anthony Doerr's Pulitzer Prize-winning All the Light We Cannot See, Erik Larson's Dead Wake, and Elizabeth Wein's Printz Honor Book Code Name Verity, this masterful work of historical fiction is inspired by the real-life tragedy that was the sinking of the Wilhelm Gustloff—the greatest maritime disaster in history. As she did in Between Shades of Gray, Ruta Sepetys unearths a shockingly little-known casualty of a gruesome war, and proves that humanity and love can prevail, even in the darkest of hours.

I loved Ruta Sepetys' debut book, Between Shades of Gray, about the horrors inflicted on the Baltic people's by The Soviet Union and Stalin. So I knew Salt to the Sea had to be worth reading, and I was right.

With text stripped down to its most essential language, Sepetys delivers a tale that is both compelling and heart wrenching. The four alternating points of view move the story along at a breakneck speed, making the reader hardly feel the passing hours and page turns. I was completely swept into the book and into the individual lives of the characters, which are revealed like Hansel and Gretel's breadcrumbs, coaxing you along page after page.

I met Ruta once a few years ago and she advised me to "write stories that matter." The story she has written of the tragic sinking of the Wilhelm Gustloff is one that matters immensely. Salt to the Sea is remarkable, memorable, and meaningful. Five stars.