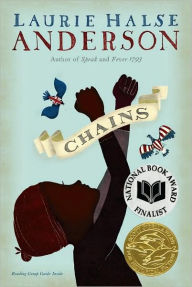 
If an entire nation could seek its freedom, why not a girl?

As the Revolutionary War begins, thirteen-year-old Isabel wages her own fight...for freedom. Promised freedom upon the death of their owner, she and her sister, Ruth, in a cruel twist of fate become the property of a malicious New York City couple, the Locktons, who have no sympathy for the American Revolution and even less for Ruth and Isabel. When Isabel meets Curzon, a slave with ties to the Patriots, he encourages her to spy on her owners, who know details of British plans for invasion. She is reluctant at first, but when the unthinkable happens to Ruth, Isabel realizes her loyalty is available to the bidder who can provide her with freedom.

From acclaimed author Laurie Halse Anderson comes this compelling, impeccably researched novel that shows the lengths we can go to cast off our chains, both physical and spiritual.

Riveting tale of a strong-willed slave girl with little hope for freedom. But it is freedom she desires and is willing to go take great risks to obtain it. Chains is a must-read, in my opinion, for kids to take an honest look at American history and slavery. It requires readers to look at the American Revolution from a different angle than we are used to, our fight for liberty--why didn't it apply to all Americans?

Knowing at the start that Isabel's story takes place a century before the Civil War, I was drawn into her story, wondering how the story of a slave in 1776 could possibly end happily? But Chains offers no easy, tied-up-with-a-ribbon kind of ending. In fact, the story is riddled with harsh realities of the era and situation in which the protagonist finds herself. The author does not sugar-coat anything. The story is at times heart-wrenching and bleak, and yet Isabel's strength and determination to be free kept me turning page, kept me rooting for her. And the end of Chains is not the end of her story. It continues in Anderson's sequel, Forge.

Brilliant writing. A compelling story that will stick in your brain long after you've finished the last page.

Profanity: None
Violence: Moderate
Sexuality: None
Posted by Laurisa White Reyes at 5:35 PM