21 BOOKS THAT LEFT THEIR MARK

In my lifetime, I've probably read well over 1,000 books. Maybe twice that. I've lost count. The vast majority of them, I've forgotten. The stories were good and I enjoyed them, but they failed to leave a permanent impression on me.

However, there are a handful of books that hit me so hard, burrowed so deeply into my psyche that I can never forget them--or how I felt when I read them. These are the books I still dream about even though, in some cases, decades have passed since I read them. You know what kind of books I mean.

So here is my list of the books which, in a literal sense, became a part of me. I love these books and consider them the dearest of friends. They are not listed in any particular order.

Lilies of the Field by William E. Barrett

I have read this book multiple times and have shared copies with friends. The story of carefree Schmidt (Smith) and the German nuns who somehow wrangle him into building a chapel is one of the most uplifting and memorable stories ever. I read it whenever I want to be reminded of the importance of appreciating the little things in life. It just makes me feel happy.

Of Mice and Men by John Steinbeck

I love Steinbeck's book for the exact opposite reason I love Barrett's. It is so heart-wrenching and depressing, how could I ever forget being a 12-year-old girl weeping inconsolably for hours after reading Of Mice and Men for the first time?

Flowers for Algernon by Daniel Keyes

I guess I'm drawn to books that make me fall in love with their characters only to have those new friends ripped away. Charly in Keyes' book is one of my favorite characters of all-time. Written as journal entries, we first meet him when he is developmentally disabled, and it shows in the quality of his writing. He is like a small child, naive and kind. Then he gets involved in an experiment which begins to improve his intellect. He experiences life through an adult's eyes, falls in love. But all the beauty of life he comes to enjoy takes a heartbreaking turn. Just thinking about it makes me want to read it again.

Verity is a female British spy captured by the Nazi's. During her interrogation, she recalls her friendship with pilot Maddie. This story is one of the most compelling I have ever read. Unforgettable. And I loved the sequel, Rose Under Fire, just as much. You'll need a box of tissue handy when you get to the end.

Chronicling an Irish family over several generations, I first listened to this book on cassette as a young child. My parents played it in the car during our long early morning drives to Los Angeles for school and work. It made an impression on me then, so when I was eighteen, I bought the book and read it again. There are some scenes in this book that still haunt me. Warning: Leon Uris's books are always very, very tragic.

The Haunting of Hill House by Shirley Jackson

The ultimate haunted house story! I read this in high school and I still get chills just thinking about it. Scrap the 1999 film with Liam Nieson, which was terrible! But the 1963 film with Julie Christie was pretty accurate to the book, I thought. But the book is classic. If you love a good horror tale, this has got to be your next read. 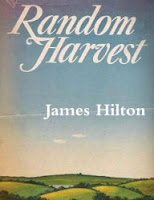 I'll bet you've never heard of this one. James Hilton was one of the most prolific novel and screen writers of the 1930s & 40s. He is probably best known for Good-bye, Mr. Chips and Lost Horizon, though Random Harvest was a best-seller in 1941, and the film version was nominated for an Oscar the following year. While not the easiest book to read, it is the story of a man who loses several years of his life due to amnesia (from a war wound) is haunted by random memories of the woman he once loved. It is a remarkable story with a stunning end that will leave you breathless.

I read this as an undergrad. Atwood's book is a bizarre labyrinth of past and present, of lies and truths. I was mesmerized by the protagonist who is unconsciously unreliable. In other words, she doesn't give you, the reader, the whole truth--but she doesn't know it herself. Brilliant.

When I got to the final pages of Ender's Game, I was so shocked I couldn't believe an author could pull off such a feat! I love surprise endings, with crazy twists that floor you but that make complete sense. (That's how I felt when I watched the films The Sixth Sense and The Others.) I fell so head over heels for this book that I've read every book in the entire Ender's Game universe, and there are a lot. This is the ultimate sci-fi lover's dream.

I first read this during the summer of my sophomore year of high school. Could not put it down, and it is a tome. Following eight generations of African Americans, from the capture of Kunte Kinte by African slave traders down through his posterity in the 20th century, this book is an important epic of American history and culture. Plus it's an amazing story.

Gone with the Wind by Margaret Mitchell

Do I need to say anything about Mitchell's classic? Just the best book ever written. Period. 'Nough said. 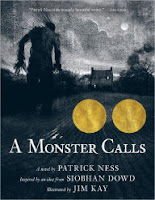 A Monster Calls by Patrick Ness

Conor receives a visitor every night--a monster who is both terrifying and comforting, who takes him on a journey through his own pain. If you have never read this book, go out and buy a copy right now. You can read it in an hour. When I finished the last page, I bawled my eyes out and held it close to my heart. My kids thought I was nuts. I love this book! And the illustrations are astounding. Destined to become a classic.

Rob discovers a caged tiger on the property of the hotel where he lives. What is a tiger doing there? This short yet powerful tale of is chock full of some of the most effective metaphors I have ever read. A Newbery honor book, it is easily one of my favorite children's stories. Simply told, yet cuts right to the heart.

The Five People You Meet in Heaven by Mitch Albom

I know everyone saw the movie, and it was good. But the book...!!! An old man dies while saving a little girl and ends up not in the heaven he expected. Instead, he discovers the meaning of his life through five people and his connection to them. Not only is this a compelling story, it is life-changing. Makes you look at life from a whole new perspective.

Thirteen Reasons Why by Jay Asher

Clay Jensen receives a package of cassette tapes recorded by a girl from his school who recently committed suicide. The cassettes are addressed to the thirteen people who knowingly or unknowingly led her to that decision. Simply heartbreaking. When I read this, I felt that every teenager ought to be required to read this book. It's the kind of story that has the power to change the world for the better.

The Hunger Games by Suzanne Collins

I'm sure I don't need to say much about Collins' book. Most people get why this is so amazing. But for those of you who may still think it's just a book about kids killing kids, dig deeper. Collins' trilogy is a critique of society and government, where the lives of actual human beings are nothing more than pawns in a chess game of power. There is too much to mention here, but The Hunger Games is complex, powerful, and much more than your average teen sci-fi adventure. And yes, you have to read the entire trilogy.

The Book Thief  by Marcus Zusak

Zusak's narrator is death. Not only is this clever, but it is horrifyingly effective. Death has the ability to see into everyone's life, revealing it little by little to the reader. But he also understands what will happen in the future. For Leisl, a young orphan girl living in 1939 Germany, her tale is entwined with stories and books and the life of Jewish man hiding in her basement. Countless books have been written about the holocaust and World War II, but this is by far one of the best.

The Devil and the White City by Erik Larson

Parallel stories: one of America's first serial killer, the other of the creation of the 1893 World's Fair. Larson is a master at transforming factual, historical research into nail-biting suspense. This non-fiction tale of murder and architecture reads like a Thomas Harris horror novel. Some of the scenes left me looking over my shoulder for months after I read it. Creepy and terrifying, the fact that it is true makes it all the more addictive.

A dystopian novel about a post-second civil war society where rebellious teens can be unwound. What does it mean to be unwound? It means the body is disassembled piece by piece (limbs, organs, bones, brain) and donated to others who are in need of them. All while the patient is awake. This is that society's answer to abortion. Unwanted children must be born, but the parents have the right to change their mind later on. And some families do it as a religious tithe. This book will make your skin crawl and will make you take a serious look at the value of human life...in all its stages.

Vladek Spiegelman, a Jewish survivor of Hitler’s Europe, tells his son about the horrors of the holocaust. Art Spiegelman brilliantly translates the story into black and white cartoon sketches where the Jews are mice and the Nazis cats. Maus received the Pulitzer Prize, and deservedly so. I studied Spiegelman's work in graduate school, and this book in particular left a vivid mark on my heart and soul. One of the few books I think everyone everywhere ought to read.

Posted by Laurisa White Reyes at 8:27 AM