Book Review: IN SUCH GOOD COMPANY by Carol Burnett 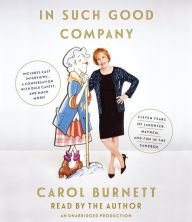 Who but Carol Burnett herself has the timing, talent, and wit to pull back the curtain on the Emmy-Award winning show that made television history for eleven glorious seasons?

In Such Good Company delves into little-known stories of the guests, sketches and antics that made the show legendary, as well as some favorite tales too good not to relive again. Carol lays it all out for us, from the show’s original conception to its evolution into one of the most beloved primetime programs of its generation.

Written with all the charm and humor fans expect from a masterful entertainer like Carol Burnett, In Such Good Company skillfully highlights the elements that made the show so successful in a competitive period when TV variety shows ruled the air waves. Putting the spotlight on everyone from her talented costars to her amazing guest stars—the most celebrated and popular entertainers of their day—Carol crafts a lively portrait of the talent and creativity that went into every episode.

I grew up watching The Carol Burnett Show and loving every sketch in every episode. Who can forget the iconic "Went with the Wind" and Carol's hilarious dress made from drapes, curtain rod and all?

When I saw Burnett's latest book, where she reminisces about all eleven years of her show, I couldn't resist. It was even more delightful because Carol narrates the audio book herself. I thoroughly enjoyed hearing her comments about each of the show's cast members and guest stars. I also loved listening her retell many of her classic sketches and movie parodies.

For anyone who loves Carol Burnett and who has fond memories of those years with her, you will love this book.