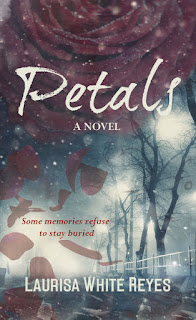 I've got a secret!

The official release date for my new novel, PETALS, is March 15th. But, guess what?

Print copies are available now HERE! And the Kindle edition can be pre-ordered HERE.

Also, please join me on Saturday March 18th from 10:00am - 1:00pm (PST) on Facebook for PETALS' official launch party!!! I'll be chatting about the book & giving away signed swag (promo goodies) and Amazon Gift Cards!

The countdown begins! See you there!


In sixty seconds, my mom will be dead.
We’re driving down Telegraph Highway, the two of us, a wrapped gift box on my lap. It is rectangular, maybe fifteen inches tall, in red foil paper with a white bow on top. We were lucky to find the drug store still open on Christmas Eve.
Mom is pleased. She’s humming along with the radio, which is playing a lively fifties holiday song. Her thumbs tap out the tune on the steering wheel. Her car keys sway in the ignition, jingling like bells.
Outside, the sky is dark. Through the storm, the road ahead looks like a long tunnel.
Snow is falling.
It happens so fast there is no time to react. Bright lights hurtle toward us on our side of the road. Mom’s arms brace against the wheel. She thrusts her foot against the brake, but the road is slick with ice. Our car swerves.
I hear a car horn blaring. I hear the crunch of metal, the pop of glass shattering. A powerful force shoves me against the car door as everything suddenly whirls in the wrong direction. I feel pain. I scream.
And then it’s over.
When I blink open my eyes, everything is white.
Snow is falling.
CHAPTER ONE -

JOIN MY FACEBOOK LAUNCH PARTY HERE
Posted by Laurisa White Reyes at 6:31 AM