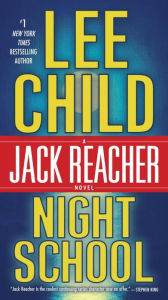 
It’s 1996, and Reacher is still in the army. In the morning they give him a medal, and in the afternoon they send him back to school. That night he’s off the grid. Out of sight, out of mind.

Two other men are in the classroom—an FBI agent and a CIA analyst. Each is a first-rate operator, each is fresh off a big win, and each is wondering what the hell they are doing there.

Then they find out: A Jihadist sleeper cell in Hamburg, Germany, has received an unexpected visitor—a Saudi courier, seeking safe haven while waiting to rendezvous with persons unknown. A CIA asset, undercover inside the cell, has overheard the courier whisper a chilling message: “The American wants a hundred million dollars.”

For what? And who from? Reacher and his two new friends are told to find the American. Reacher recruits the best soldier he has ever worked with: Sergeant Frances Neagley. Their mission heats up in more ways than one, while always keeping their eyes on the prize: If they don’t get their man, the world will suffer an epic act of terrorism.

This is the 8th Jack Reacher I've listened to. I've loved them all, and trust me, I am not normally a tough guy, mystery thriller kinda gal. But there is something about Jack Reacher's no-nonsense, straight forward way of tackling problems and beating the crap outa bad guys that appeals to me. Kinda like a street-wise, American James Bond.

Night School follows Jack and his Fed friends on the trail of a guy who's just accepted $100 million from Saudi terrorists. But what the heck is worth that much money? That is the mystery. Not only that, but Jack must also find the guy who's got the goods before some other corrupt powerhouse gets his hands on them.

Don't expect literary genius or fancy gun battles. Reacher books are a fun ride just for the hell of it.