IN HONOR OF MY PARENTS' 50TH ANNIVERSARY 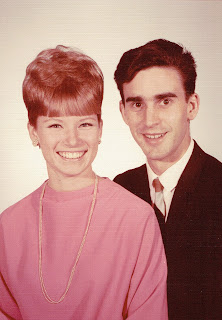 Two very special days occurred this week. Father's Day was last Sunday, and my parents' 50th anniversary was last Saturday, June 17th. While I normally post about books here, I want to share with you a different kind of story, a love story. The kind of love story we all dream of.

This past week I've been digging through my parents' boxes of old photographs and scanning them into my computer. There are hundreds, perhaps thousands, of pictures dating back to the 40s when my mom and dad were babies, all the way through today. At times, I've been literally moved to tears. It's overwhelming to view a love story in its entirety. Well, not its entirety, because it's not over yet.

My dad, Raymond A. White, was born on April 18, 1945 in Highland Park, California (Los Angeles). My mom was born not far away in Monrovia, California on March 15, 1948. They first met each other in the summer of 1966 when they traveled via bus with a group of other Latter-day Saint young adults to a conference at Idyllwild. My dad says he spotted my mother, with her blue eyes and red hair, as they were boarding the bus and immediately knew he had to meet this girl. It was love at first sight for him.

During the few days they were at the conference, Dad played guitar, which Mom liked. He looked 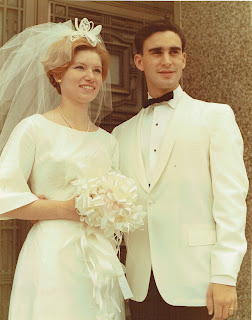 and sounded like Elvis. But Dad had to cut the weekend short because he had to get back to the city to attend a friend's mission farewell, where he was scheduled to speak. (For my non-Mormon friends, this was a church meeting honoring a missionary about to leave for his service.) Dad caught a ride with a couple of friends, and my mom asked if she could get a ride too. She also had a missionary farewell to attend. Turns out it was the same farewell, the same common friend, Doug Brown.

Dad was thrilled. He'd finally get a chance to have Mom all to himself for a couple of hours in the back of the truck. But Mom got car sick and moved into the cab. Disappointment.

When they got to the church, they left their camping gear in the foyer and entered the chapel where the meeting had just begun. Dad made a bold move. He took Mom's hand in his and led her to the very front of the chapel to sit beside him on the stand. After the meeting, they greeted Doug. He told them, "I always knew one day you two would meet. I expect you to be married before I get home."

Remember, they had barely known each other a few days, and had only briefly spoken a couple of times! Well, Doug's prediction came true. Dad was completely smitten. He proposed on Mom's front porch in December of 1966. They married in June 1967. 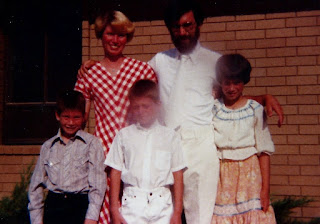 Most fairytales end there with "And they lived happily ever after." And part of that would be true. Mom and Dad have been happily married now for fifty years. But during those decades they faced a lot of trials. After having their first three kids (I'm the oldest), Mom was diagnosed with Type 1 Diabetes. A year later, in December 1976, her fourth baby, my brother Christian, was stillborn. For the next few years, Mom was in and out of the hospital; her life often hung precariously in the balance.

But despite Mom's health, she and Dad were also quite adventurous. They moved our family to Frazier Park, a rural community in the mountains of Southern California, and built a 2400 sq. foot log home--by hand. It took a year to complete, during which we lived in a rental house, then a trailer on our property, and even a tent. We had no electricity. No plumbing. In winter, we moved into our half-finished house and stayed warm using an old pot belly wood burning stove someone gave us, and an electric heater that ran on power from a neighbor's house two properties down. We strung a train of power cords from our window through theirs. While we three kids shared the single fold-out couch and huddled to stay warm every night, Dad would spend his days working in Los Angeles, two hours away, and then spend his nights building our home. 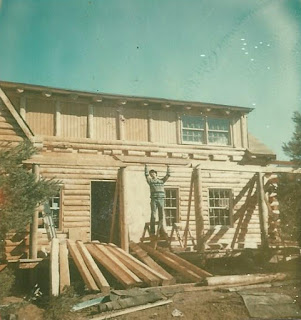 At one point, during a melt, we lost a lot of our belongings due to all the water and had to live with
friends until the weather improved. We lived in Frazier Park for five years. As kids, we loved it. Trees to climb. Endless trails and fields to explore. It was kids' paradise. But Mom didn't like that Dad was in L.A., and I was going to high school in Bakersfield, and the boys' school was pretty far too. She felt isolated and as she said, her mother hen's wings couldn't reach that far. So in 1982 Mom and Dad sold our log home and moved to La Canada, CA where Dad had just been hired as a computer programmer for Jet Propulsion Laboratory.

I could tell you countless stories about my parents during those years, how Mom tried to work the graveyard shift at Denny's on the Grapevine and lasted only two days because her diabetes didn't like the schedule (and she spilled milkshakes on some customers), and about our vacation to Hume Lake cut short because Dad just had to call into work to see if they needed him (and where my brother Trevor got a fish hook caught in his finger), and how Mom, who was a professional seamstress, made all my Dad's suits and my dresses, as well as dolls for me and teddy bears for my brothers. 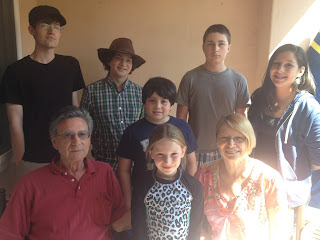 Mom and Dad faced financial hardships and diabetes, but somehow always managed to remain faithful to the Church and to God, and just as faithful to each other. Growing up, I never heard my parents argue. Disagree sometimes, yes, but they never raised their voices at each other and always showed the utmost respect toward one another. Dad helped around the house and Mom repaired the washing machine or rewired the lighting or built garden walls. They (or I should say Mom) owned and operated many businesses. Mom became a hearing aid specialist. In fact, Mom pursued many interests and educational opportunities, and Dad always supported her 100%.

They always loved each other. They held hands (still do) in public. Shared kisses in the kitchen. Said "I love you" often. After 50 years, they still smile at each other. 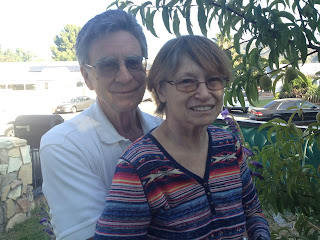 Between the 1980s and today, Mom and Dad traveled Israel and Ireland, supported their three kids through missions, college, and marriage, and rejoiced in the births of sixteen grandchildren. They endured the loss of their own parents, the loss of jobs and forced early retirements, and failed investments. They continue to face health problems and even injury. This past year saw Mom in the hospital twice near death. Dad refused to leave her side. During her first near miss, Dad slept on the floor beside her hospital bed every night for a week. During the second, the hospital gave him a fold out chair to sleep in. When Mom fell in March and broke her pelvis in three places resulting in a three month recuperation, Dad did everything for her. Literally. As their daughter, and because they live in my home, I've had the privilege of witnessing my Dad's love for and devotion to my mom first hand. But it is nothing new. I've seen this same devotion throughout my entire life. 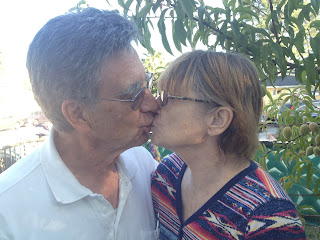 Today, Mom and Dad enjoy binge watching TV shows together, sometimes devouring ten or more seasons in a single month. They enjoy going out to lunch when Mom feels up to it, or walking to the park (Dad pushes Mom in her wheelchair. They call it walking and rolling.) They go to the movies, travel to Oklahoma and Washington to visit grandchildren, and spend time here at home with their grandchildren here. Dad tutors the kids in math or drives them wherever and whenever they need to go. Mom watches movies and talks with the kids about all kinds of topics.

When I look at my parents, when I look back on the past fifty years of their life together, I can't help but feel incredibly lucky. Lucky to have had parents who are as close to perfect as people can get (at least from my perspective). Lucky to have parents who have been the best examples possible as human beings, as spouses, as parents, as Christians. Lucky to be able to say my Mom and Dad have been my best friends throughout my life. But more importantly, they have always been each other's best friend.

You know, they just don't make love stories like this anymore. Theirs is one in a million.