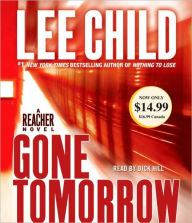 Susan Mark, the fifth passenger, had a big secret, and her plain little life was being watched in Washington, and California, and Afghanistan—by dozens of people with one thing in common: They’re all lying to Reacher. A little. A lot. Or just enough to get him killed. A race has begun through the streets of Manhattan, a maze crowded with violent, skilled soldiers on all sides of a shadow war. For Jack Reacher, a man who trusts no one and likes it that way, the finish line comes when you finally get face-to-face and look your worst enemy in the eye.

I have a thing for Jack Reacher novels. I've now listened to eight of the twenty-one books in the series. I have to say that GONE TOMORROW has been my favorite so far. This story kept me guessing every step of the way. Nothing and no one was what they seemed. And the ending was spectacular! If you don't like blood and guts, don't read Jack Reacher.