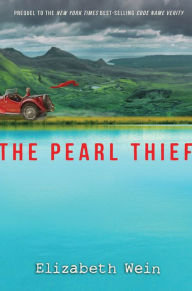 
When fifteen-year-old Julia Beaufort-Stuart wakes up in the hospital, she knows the lazy summer break she'd imagined won't be exactly what she anticipated. And once she returns to her grandfather's estate, a bit banged up but alive, she begins to realize that her injury might not have been an accident. One of her family's employees is missing, and he disappeared on the very same day she landed in the hospital.

Desperate to figure out what happened, she befriends Euan McEwen, the Scottish Traveller boy who found her when she was injured, and his standoffish sister, Ellen. As Julie grows closer to this family, she witnesses firsthand some of the prejudices they've grown used to-a stark contrast to her own upbringing-and finds herself exploring thrilling new experiences that have nothing to do with a missing-person investigation.

Her memory of that day returns to her in pieces, and when a body is discovered, her new friends are caught in the crosshairs of long-held biases about Travellers. Julie must get to the bottom of the mystery in order to keep them from being framed for the crime.

I loved CODE NAME VERITY and its sequel ROSE UNDER FIRE. Two of the greatest, most heart-wrenching books I've ever read.

THE PEARL THIEF is billed as a prequel to CODE NAME VERITY, but even though the books share a main character, the books have nothing else in common. THE PEARL THIEF is a murder mystery set in pre-war Scotland. Julie is a 15-year-old member a privileged family who has, in essence, lost its fortune but not its name. She gets embroiled in the supposed murder of a local academic and the disappearance of her estate's treasured pearls.

On its own, the story is fun to read and keeps you guessing. Wein has set the book where she lives and has researched it meticulously. Her writing style is literary and beautiful. I thoroughly enjoyed the book. However...

I really expected more, or at least something different, from Elizabeth Wein. Her other books are so emotional, so compelling and deep that they burrow into your heart and refuse to leave you. This book not so much. Not that Wein hasn't the right to craft a light-hearted tale (if you can call a probably, violent murder light-hearted), but because the story was marketed as connected to CODE NAME VERITY, I was naturally disappointed that this book lacked the same emotional depth and resonance as her previous books.

I can gladly recommend THE PEARL THIEF as a stand-alone, historical, coming of age, mystery. As that, it's great. Though I need to mention the homosexual overtones. There are two instances of teen girls kissing, and there is an appearance of a transgender character (which was really irrelveant to the story, just thrown in to make a point). At the end, the main character briefly contemplates her bi-sexuality (which honestly doesn't seem to fit into a 1930s setting).

Otherwise, THE PEARL THEIF is a worthy summer read. But  I hope Wein's next book will be more along the lines of her previous releases.

Read my reviews of CODE NAME VERITY and ROSE UNDER FIRE.