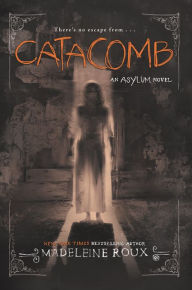 
Sometimes the past is better off buried.

Senior year is finally over. After all they've been through, Dan, Abby, and Jordan are excited to take one last road trip together, and they're just not going to think about what will happen when the summer ends. But on their way to visit Jordan's uncle in New Orleans, the three friends notice that they're being followed . . . and photographed. Then Dan starts receiving messages from someone he didn't expect to hear from again—someone who died last Halloween.

When the trio arrives in New Orleans and the strange occurrences only escalate, Dan is forced to accept that everything that has happened to him in the past year may not be a coincidence but fate—a fate that ties Dan to a group called the Bone Artists, who have a sinister fascination with notorious killers of the past.

Now Dan's only hope is that he will make it out of his senior trip alive.

This is the fourth Asylum book I've read, and I've enjoyed every one of them. In this installment, Dan and his friends head to New Orleans to help Jordan settle in before starting college there. But when Dan starts getting text messages from someone he knows is dead, things start to get creepy. Soon they get embroiled in a decades-old family feud between Dan's birth parents and the Bone Artists, a sinister group who steals people's bones and turns them into magical talismans.

While the plot is sometimes a little difficult to follow, the story moves at a clipped pace and kept me turning pages. The author includes weird photos, though the story would be just as good without them. CATACOMB is a perfect quick read for anyone who loves suspense and the supernatural.