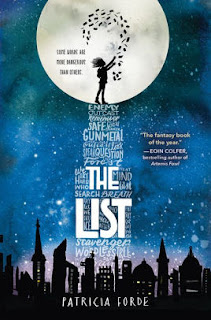 You are The Wordsmith now. Are you ready for the challenge?

The city of Ark is the last safe place on Earth. To make sure humans are able to survive, everyone in Ark must speak List, a language of only 500 words.

Everyone that is, except Letta.

As apprentice to the Wordsmith, Letta can read all the words that have ever existed. Forbidden words like freedom, music, and even pineapple tell her about a world she's never known.

One day her master disappears and the leaders of Ark tell Letta she is the new Wordsmith and must shorten List to fewer and fewer words. Then Letta meets a teenage boy who somehow knows all the words that have been banned. Letta's faced with a dangerous choice: sit idly by and watch language slowly slip away or follow a stranger on a path to freedom . . . or banishment.

Imagine a world without words. Noa rescued the people of Ark after the melting, but he blames humans and the deceptive way they used words for the disaster. The only way to heal the world is to limit people's ability to communicate with each other. But Letta, the apprentice wordsmith, discovers the truth behind Noa's efforts.

Patricia Forde's post-apocalyptic tale is reminiscent of so many dystopian stories that came before it, like Lois Lowry's The Giver and Margaret Peterson Haddix's Among the Hidden, but Forde's concept is unique in that is explores the role language plays in human society, both in a positive and negative light. Perhaps what is so compelling about Letta's story is that there is so much truth behind her dilemma. Words are indeed used to manipulate and control, but they are also used to love and to create.

The List promises to hold its own among others in its genre and is a good book for prompting discussions about communication and language.

Profanity: None
Sexuality: None
Violence: Moderate
Posted by Laurisa White Reyes at 5:00 AM