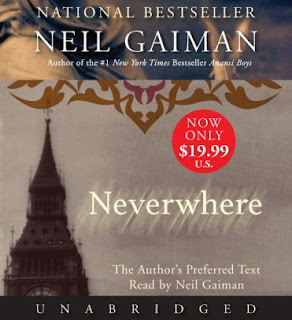 Richard Mayhew is a young man with a good heart and an ordinary life, which is changed forever when he stops to help a girl he finds bleeding on a London sidewalk. His small act of kindness propels him into a world he never dreamed existed. There are people who fall through the cracks, and Richard has become one of them. And he must learn to survive in this city of shadows and darkness, monsters and saints, murderers and angels, if he is ever to return to the London that he knew.

This classic Gaiman tale was first published in 1996 as a BBC television series and was later adapted into a novel by the author that same year. The audio recording, recorded by the author, was released in 2013.

I have to be honest here. I do love Neil Gaiman. Loved Coraline, The Graveyard Book, and The Ocean at the End of the Lane. I did not love Neverwhere.

It's not that Neverwhere wasn't "Gaiman-esque" enough. It was. Very clever, very creepy, and even nightmarish at times. There wasn't anything necessarily wrong with the book. But the genre, the general plot line, is such an overused one. Some unsuspecting "normal" human from the normal human world discovers a passageway into some "other" world. This human meets some not-so-normal characters and sets out on a quest to vanquish evil. And, of course, good always wins.

In this case, the protagonist, Richard Mayhew, is so completely ordinary, I never throughout the entire story came to like him. He was dull and uninteresting. The heroic deeds he eventually accomplishes are frequently accidental. He's sort of like Frodo Baggins in that way. Nothing special but he finds himself in an extraordinary situation with extraordinary friends. Richard's friends are all very interesting and heroic, and they are the reason I kept listening to the story.

I kept thinking about The Lion, the Witch and the Wardrobe; The Wizard of Oz; Alice in Wonderland; and even Harry Potter, all books that follow this same basic plot idea and do it well. I just didn't think Neverwhere was unique enough to stand out. I know. How can I say that about the brilliant Neil Gaiman? He is brilliant, of course, and he is an amazingly great writer, which is why he gets away with Neverwhere.

Sorry. It just didn't live up to my exceptionally high expectations.