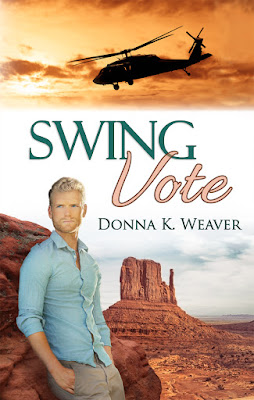 Enter below to win a copy of SWING VOTE!

Marc survived an IED, but will his heart survive McKenzie?

An IED blew up more than Marc North's career as a Cobra pilot; it shattered his plans for marriage. After being dumped by his girlfriend and spending more than a year in rehab, all he wants is to fly again. He jumps at the chance to partner with a combat buddy in a helicopter sightseeing business. Now in a boomtown in southern Utah, Marc gets caught up with local politics. And the local election official.

At work, McKenzie Terkildsen struggles to keep control of a dangerously contentious election. At home, she shares the challenge of raising younger half-brothers with her older step-brother. He complicates things by inviting a Marine buddy to stay with them while the two build a business together. As a council member takes liberty with facts and stirs the already caustic election brew, the last thing McKenzie needs is one more guy messing up her life—or her heart.