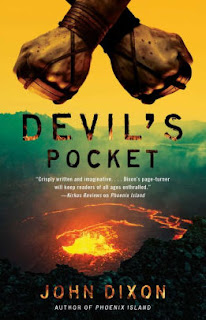 
With a chip in his head and hundreds more throughout his body, sixteen-year-old Carl Freeman was turned from an orphan with impulse control issues into a super-soldier. Forced into the mercenary Phoenix Force group, he begins to fear he’ll never escape. Sent to a volcanic island to fight for them, he’ll compete in a combat tournament that awards teens with survival for merciless brutality. But just when all looks lost, he spies a friendly face…and possibly a way out.

I read DEVIL'S POCKET for my book club. It was selected because it won the Bram Stoker Award (young adult division). I didn't realize it was the sequel to Dixon's PHOENIX ISLAND, which also won the award. But that was fine because the book stood solidly on its own.

The protagonist, Carl, has been altered to become a killing machine. But he doesn't want to kill. So when he's sent with a team of three other experiences fighters to compete in the Funeral Games, a secretive extreme MMA match funded by the mysterious Few, Carl is determined to win without taking a single life.

But then he runs into an old friend, Octavia, who has been sent to the games as a spy using her own superhuman abilities to uncover the Few's identities, Carl soon gets swept into a mission broader and more dangerous than he could imagine.

I got hooked into this story right from the start. Dixon's writing is bold, the plot an edgy mix of grit and technology. Definitely a page-turner with plenty of surprises. Dixon was a boxer, and his descriptions of the fighting is so realistic that you could feel the skin splitting, the bones breaking. And yet I would not say the violence is graphic. He describes what is necessary to the story and nothing more.

My favorite thing about DEVIL'S POCKET is that it is a clean read. No profanity. No sex. I would feel comfortable giving this to my own teens to read. This is just top notch entertainment here, a fully satisfying read.

Profanity: None
Sexuality: None
Violence: High