BOOK REVIEW: AND THE TREES CREPT IN by Dawn Kurtagich 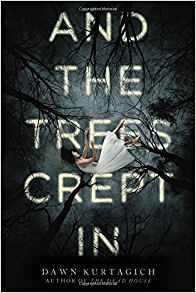 AND THE TREES CREPT IN
Dawn Kurtagich
Little, Brown Books for Young Readers
Ages 14 & up


When Silla and Nori arrive at their aunt's home, it's immediately clear that the "blood manor" is cursed. The creaking of the house and the stillness of the woods surrounding them would be enough of a sign, but there are secrets too--the questions that Silla can't ignore: Who is the beautiful boy that's appeared from the woods? Who is the man that her little sister sees, but no one else? And why does it seem that, ever since they arrived, the trees have been creeping closer?


MY REVIEW:
I am torn with this one. I honestly got  hooked from the first page and read it at a lightening pace. This story was like a sinister nightmare or mental breakdown. The ultimate haunted house tale. Unfortunately, the ending completely sucked. The author spends way too much time explaining everything, as if she doesn't trust the reader to "get it". But that wasn't the worst.
SPOILER ALERT: I won't give it all away, but let's just say that in the very last paragraph the author resorts to reincarnation to give the protagonist a second chance. I read the ending and went "WHAT????" It literally made the entire book a pointless waste of time. I call this the Leviathan effect. In the (stupid) film Leviathan, the protagonist fights against mutant undersea creatures. He finally succeeds in escaping to the ocean surface only to get eaten by a shark. The end. The same thing happens in the classic horror film Night of the Living Dead where the protagonist spends all night defending himself against flesh eating zombies only to finally survive until morning. Then he is mistaken as a zombie and is shot and killed. The end. I hate stories where the ending basically destroys the whole point of the rest of the book or movie, especially if the rest of the story was really great. What a let down.
So, if you want to read a thrilling mind-bending horror novel that will give you delicious chills--and don't mind a crappy ending, then this book is for you.