BOOK REVIEW: THE GREATEST PROSPECTOR IN THE WORLD by Kenn Dunn 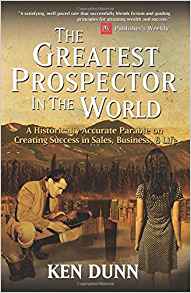 THE GREATEST PROSPECTOR IN THE WORLD
Ken Dunn
Next Century Publishing

Laura Dunagan, was born in the gold prospecting days of rustic Alaska in the early 1900's. When Laura was 16 years old, her father was trapped under a mud slide while prospecting in a nearby river and died. Laura was forced to move to Chicago in the care of her rich Uncle Joe. Laura hated Uncle Joe because he forced her to leave the river, but also because he had left the family prospecting business to move to Chicago years before she was born. Laura discovers that Uncle Joe made his fortune selling insurance and was the owner of the largest insurance company in Illinois. While wondering through the mansion one day, she found Uncle's Joe personal den. In it, she discovered an entire new life that would lead her to heights that she would never had realized panning for gold in Alaska. Uncle Joe used the 6 gold prospecting rules for safety to prospect new clients for his insurance company and in doing so, discovered the secrets to wealth in selling.

Dunn's tale is a self-help book disguised as a novel about a girl who learns the secrets of success from her uncle and applies them to selling sewing machines in the early 20th century.  While Laura's story isn't necessarily the most compelling, the secrets she learns are worth the read. These secrets for success are general but like the gold Laura used to pan for as a child, they are also priceless nuggets that can help any salesperson excel at his/her trade.