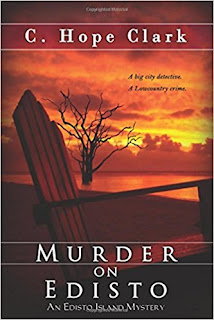 Peace, safety, a place to grieve and heal. After her husband is murdered by the Russian mob, Boston detective Callie Jean Morgan comes home to her family’s cottage in South Carolina. There, she can keep their teenage son, Jeb, away from further threats.

But the day they arrive in Edisto Beach, Callie finds her childhood mentor and elderly neighbor murdered. Taunted by the killer, who repeatedly violates her home and threatens others in the community, Callie finds her new sanctuary has become her old nightmare. Despite warnings from the town’s handsome police chief, Callie plunges back into detective work, pursuing a sinister stranger who may have ties to her past. He’s turning a quiet paradise into a paranoid patch of sand where nobody’s safe. She’ll do whatever it takes to stop him.

I was hooked from page one! Callie Morgan retired from detective work after her husband was murdered by the Russian mafia. She escapes to Edisto, a quiet island in South Carolina, where she can hopefully raise her teenage son and recover from her anxiety and panic attacks. But she's barely moved in when her neighbor and long time friend, Papa Beach, is brutally murdered. Even worse, the culprit starts breaking into other nearby homes and leaving clues meant to unravel Callie, who is torn between drowning her fears in booze or hitching up her detective skills and tracking down the bad guy.

Callie Morgan is a completely accessible and approachable character. The author really takes us deep into her psyche and her heart. My favorite character though is her neighbor, feel-good new age optimist, Sophie. The story itself is straight up addicting. I found myself thinking about it between reads, wracking my brain trying to figure out who the bad guy was. When I got to the last five chapters I said, "Screw it!" Turned off my computer, closed my bedroom door, and read until THE END. Very satisfying read. I ordered book 2 immediately.