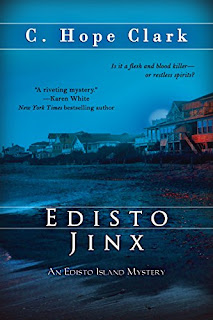 According to Sophie the psychic, beautiful Edisto Beach becomes a hotbed of troublemaking spirits every August. But when a visitor dies mysteriously during a beach house party, former big-city detective Callie Morgan and Edisto Beach police chief Mike Seabrook hunt for motives and suspects among the living. With tourists filling the beaches and local business owners anxious to squelch rumors of a murderer on the loose, Callie will need all the help she can get--especially once the killer's attention turns toward her.

C. Hope Clark has nailed it again! Former detective Callie Morgan is back. This time she witnesses the sudden, mysterious death of a young woman during a bustling party. Most assume it's an accident until Callie discovers that a murder has occurred this same time each summer for the past six years, and all the victims resemble each other. While most of her friends brush off the connection, Callie knows there's a serial killer in their midst, and she is determined to find him before  he strikes again.

Like the first book in the series, Edisto Jinx is an addictive read. Callie is one of those characters who is like a long time friend you could just sit down and shoot the breeze with. And Clark's writing is spot on, engaging, snaring readers and not letting them go. I loved this book and can't wait to read the third in the series.

Posted by Laurisa White Reyes at 6:51 AM