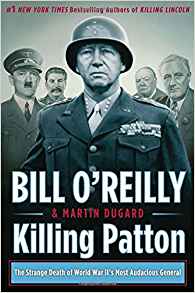 General George S. Patton, Jr. died under mysterious circumstances in the months following the end of World War II. For almost seventy years, there has been suspicion that his death was not an accident―and may very well have been an act of assassination. Killing Patton takes readers inside the final year of the war and recounts the events surrounding Patton's tragic demise, naming names of the many powerful individuals who wanted him silenced.

While the premise of O'Reilly's book is about the strange death (some suggest murder) of World War II's greatest general, this is really the story of the last year of the war in Europe. Told in incredible detail, Killing Patton is an enthralling journey through the battles and engagements that led to the end of the war and to Patton's untimely death shortly thereafter. A fantastic book!