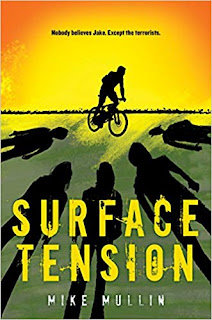 After witnessing an act of domestic terrorism while training on his bike, Jake is found near death, with a serious head injury and unable to remember the plane crash or the aftermath that landed him in the hospital.

A terrorist leader’s teenage daughter, Betsy, is sent to kill Jake and eliminate him as a possible witness. When Jake’s mother blames his head injury for his tales of attempted murder, he has to rely on his girlfriend, Laurissa, to help him escape the killers and the law enforcement agents convinced that Jake himself had a role in the crash.

The publisher provided a copy in exchange for my honest review. SURFACE TENSION is one of the most gripping teen thrillers I have ever read. The action and suspense never let up, not even in the last paragraph.

Jake is an ordinary teen obsessed with bike racing. When he ends up in the hospital after witnessing a plane crash, he has no memory about what happened. A girl tries to murder him, and the FBI believes he's involved with the crash. As Jake tries to solve the mystery of the downed plane and the identity of his assassin, he and his girlfriend end up in a race for their lives -- and to stop the next terrorist attack before it's too late.

Author Mike Mullin pulls no punches. Just when you think things can't get any worse for Jake, they do. The stakes just keep getting higher and higher. I literally could not put the book down through the entire second half. And the end left me reeling. Will there be a sequel? I sure hope so.