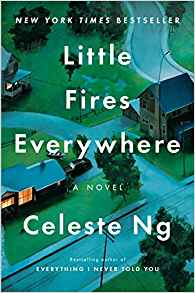 In Shaker Heights, a placid, progressive suburb of Cleveland, everything is planned – from the layout of the winding roads, to the colors of the houses, to the successful lives its residents will go on to lead. And no one embodies this spirit more than Elena Richardson, whose guiding principle is playing by the rules.

Enter Mia Warren – an enigmatic artist and single mother – who arrives in this idyllic bubble with her teenaged daughter Pearl, and rents a house from the Richardsons. Soon Mia and Pearl become more than tenants: all four Richardson children are drawn to the mother-daughter pair. But Mia carries with her a mysterious past and a disregard for the status quo that threatens to upend this carefully ordered community.

When old family friends of the Richardsons attempt to adopt a Chinese-American baby, a custody battle erupts that dramatically divides the town--and puts Mia and Elena on opposing sides.  Suspicious of Mia and her motives, Elena is determined to uncover the secrets in Mia's past. But her obsession will come at unexpected and devastating costs.

The stories of five teenagers, a Chinese baby, and their mothers are woven into an intricate tapestry of mystery, emotion, racism, and love. Ng's characters are so real they practically leap off the page and co-exist with you in the real world. Plot twists are cleverly revealed and keep readers turning pages. An exciting yet heart-breaking tale about motherhood and the lengths to which women will go for their children.

SPOILER ALERT:
There is a lot of teen sex (though not graphically depicted) and abortion in this book without much discussion about their long-term emotional implications. That's the one thing that disappointed me. Ng makes teen sex in the 80s seem casual (It wasn't then. I was a teen in the 80s and kids in my school that had sex were considered sluts), and that there aren't really any consequences. Yes, a girl gets pregnant and then gets and abortion, but the girl seems to "bounce back" rather quickly, like it was no big deal. Shame on Ng for perpetuating the lie that abortion does not leave a painful emotional scar on most of the women who obtain one, and for promoting "fun" teen sex without exploring the sometimes devastating results.