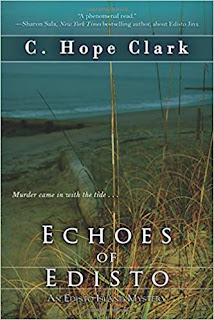 Edisto Island is a paradise where people escape from the mainstream world. Yet for newly sworn-in Edisto Police Chief Callie Jean Morgan, the trouble has just begun . . .

When a rookie officer drowns in a freak crash in the marsh, Callie’s instincts tell her it wasn’t an accident. As suspects and clues mount, Callie’s outlandish mother complicates the investigation, and Callie’s long-time friendship with Officer Mike Seabrook takes a turn toward something new—but is shadowed by the unsolved mystery of his wife’s death. Everyone’s past rises to the surface, entangling with death that cuts to the bone.

I think it's safe to say I'm a die-hard fan of detective Callie Morgan and the Edisto Island Mystery series. Volume three, Echoes of Edisto, is less mystery and more Callie. Who is she? What does her future on Edisto hold for her?

But of course there is a mystery! After her neighbor crashes into the marsh resulting in the death of one of Callie's best officers and nearly killing her, Callie learns the accident was intentional. As she tries to fit together pieces of the puzzle, some pieces just don't fit. Others connect in a way that cuts Callie to the core. And then the shocking end. Just when I started thinking, "for a mystery, there isn't really any murder," I'm proven wrong. Not every story has a fairytale ending (which really made me mad, quite frankly), but that's what I like about this series. It's like reading about real people, real heroism, and real tragedy. C. Hope Clark makes her characters pop off the page, forces you to love them like your best friends.


Posted by Laurisa White Reyes at 5:00 AM