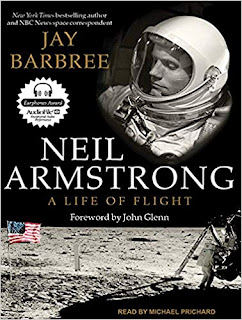 Much has been written about Neil Armstrong, America's modern hero and history's most famous space traveler. Yet shy of fame and never one to steal the spotlight, Armstrong was always reluctant to discuss his personal side of events. Here for the first time is the definitive story of Neil's life of flight he shared for five decades with a trusted friend-Jay Barbree.

Barbree writes about Neil's three passions-flight, family, and friends. This is the inside story of Neil Armstrong from the time he flew combat missions in the Korean War, to when he saved his Gemini 8 by flying the first emergency return from Earth orbit, to when he flew Apollo 11 to the moon's Sea of Tranquility. Through his friendship with Neil and his dedicated research, Barbree brings us the most accurate account of his friend's life, the book he and the famed astronaut planned together for twenty years.

What an astounding life Neil Armstrong led. Barbee's close and personal biography of one of America's greatest heroes and the first man on the moon is compelling and memorable. Because of Barbee's friendship with Armstrong, we get glimpses into Armstrong that other authors simply cannot give, such as the depth of his anguish with the death of his baby daughter, his tenacity to get things right, his humility in the face of international fame.

This biography takes us from the earliest days of Neil Armstrong's life through his years as a World War II fighter pilot, serving his country as one of its first astronauts to his moon landing, to the the Challenger and Columbia tragedies to the end of his amazing life.

Not only is the story itself fantastic, but so is Barbee's writing. A veteran reporter, Barbee is a master at language and keeping readers riveted. I can't imagine anyone telling this story better than he has. No American can listen or read this biography without falling in love with Neil Armstrong.