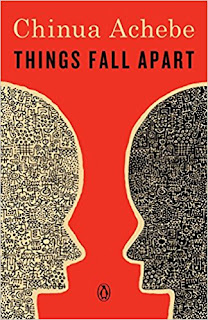 Things Fall Apart is the first of three novels in Chinua Achebe's critically acclaimed African Trilogy. It is a classic narrative about Africa's cataclysmic encounter with Europe as it establishes a colonial presence on the continent. Told through the fictional experiences of Okonkwo, a wealthy and fearless Igbo warrior of Umuofia in the late 1800s, Things Fall Apart explores one man's futile resistance to the devaluing of his Igbo traditions by British political and religious forces and his despair as his community capitulates to the powerful new order.

I heard about Things Fall Apart on PBS's The Great American Read and added it to my TBR list. Now, having read it, I honestly don't see what all the fuss is about.

I know Barack Obama called this a "masterpiece", and I've read that this is the most beloved novel of Africa, but how it ended up as one of America's greatest books is beyond me.

The story has myriad loose ends, subplots that go nowhere, like the story of Okonkwo's son, Nweye, or his daughter who becomes so sick, gets better, and nothing else of import happens. The story starts off well enough, with Okonkwo taking in a young exile from another village and raising him as his own son. Then when the village oracle commands that the boy dies, Okonkwo, against the warnings of his friend, cuts the boy down with a machete. But then the story never really develops into what I'd call a story worthy of a novel. It reads more like a diary of a man's life.

Also, the style of writing, while perhaps praised in African literature, is nearly 100% "telling". We are told what happens in Okonkwo's life, but we get little in the way of active "showing". And the tale ends abruptly with the tragic reveal of how the white man's intrusion on Okonkwo's world destroys his culture and expectations for his life. I think THAT message, the white man descends on a native African world and turns it upside down, is why this book is so popular among (I'm assuming) progressives here in America. It isn't that the book is any good, it's that it preaches an anti-white sentiment, which Barack Obama did so well while he was president.

Overall, it's a worthy read for anyone interested in international forms of literature or who like traditional tales that spread animosity toward white people. (See the Underground Railroad by Colson Whitehead for more of that.) And the part about the white man coming only encompasses that last few chapters.

I can't help but think placing this book on The Great American Read had nothing to do with actual polling but of a progressive agenda (Hey, we need some anti-white books on this list!) which makes me doubt the validity of the entire list.