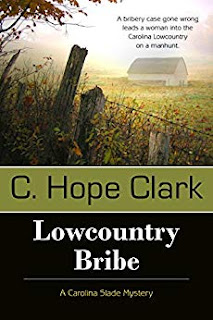 
A bribery case gone wrong leads a woman into the deep, dank Carolina Lowcountry on a manhunt.

Carolina Slade, a by-the-book federal county manager in the coastal Lowcountry of South Carolina, reports an attempted bribe only to find herself a key player in a sting operation run by Senior Special Agent Wayne Largo from the IG Office in Atlanta.

However, the IG isn't telling Slade everything about this case or the disappearance-presumed-murder of Slade's boss the year before. When the sting blows up, both cases are put on hold and Wayne is yanked back to Atlanta, leaving Slade to fear not only for her life and job, but for her children's safety.

Suddenly, operating by the book is no longer an option.

I got hooked on Clark's Edisto Island Mysteries series and so I thought why not check out the series that got her started?

Carolina Slade is an agricultural loan broker, what is normally a straightforward, rather unexciting career for the soon-to-be divorced mother of two. But then one of her usual clients, a hog farmer, offers her a bribe to arrange a sale of some land for him. She does the right thing and calls in the Feds, one of whom sparks a little hope of romance for Carolina.

What should be an open and shut case turns into an increasingly dangerous game for Slade, who soon finds herself the target of someone's personal vendetta.

I wasn't sure if could into a book about a loan broker and a hog farmer, but knowing how much I love Clark's other series, I gave this one a chance and I was not disappointed. Clark delivers a "can't-put-it-down" story that gets more complex and suspenseful at every turn. I honestly didn't see the twist at the end coming, though the signs were all there. I love it when that happens! And those last few chapters kept me turning pages late into the night until I finished the book, which I absolutely felt compelled to do.