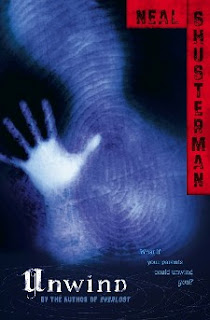 Summary
Connor, Risa and Lev are three very different teens from three very different backgrounds. They have only one thing in common - they are slated to be unwound. In the post Heartland War society, kids ages 13-18 are vulnerable. If their parents don't want them anymore, or if they don't fit into society, or (as in Lev's case) parents choose to tithe one of their children for the greater good, a kid can be sent to harvest camp to have all their body parts and organs donated to help other people survive. But Connor, Risa and Lev do the unthinkable - they escape.

Review
UNWIND is riveting. By the time I reached the  middle of the book, I simply could not put it down. That is rare for me. I am a slow reader, but I stayed up one night until nearly 2 am so I could finish it. Neil Schusterman's writing is straight forward and fast paced. The characters and the suspenseful plot drive the story along. One chapter near the end was so deliciously disturbing and creepy I thought about it for days afterwards. This is an equally great read for both boys and girls. But as an adult, I absolutely loved it and am eager to read some of Schusterman's many other titles.


Score: 4 out of 5 stars
Profanity: None
Violence: Mild
Sex: None
Posted by Laurisa White Reyes at 12:01 AM