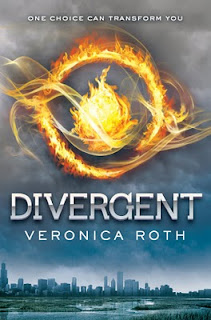 Summary (from Ms. Roth's website): In Beatrice Prior's dystopian Chicago, society is divided into five factions, each dedicated to the cultivation of a particular virtue—Candor (the honest), Abnegation (the selfless), Dauntless (the brave), Amity (the peaceful), and Erudite (the intelligent). On an appointed day of every year, all sixteen-year-olds must select the faction to which they will devote the rest of their lives. For Beatrice, the decision is between staying with her family and being who she really is—she can't have both. So she makes a choice that surprises everyone, including herself.

During the highly competitive initiation that follows, Beatrice renames herself Tris and struggles to determine who her friends really are—and where, exactly, a romance with a sometimes fascinating, sometimes infuriating boy fits into the life she's chosen. But Tris also has a secret, one she's kept hidden from everyone because she's been warned it can mean death. And as she discovers a growing conflict that threatens to unravel her seemingly perfect society, she also learns that her secret might help her save those she loves… or it might destroy her.

Scroll down for my review.


My Review:  I am probably the last person on earth to have read Divergent. (I actully listened to it on my Ipod.) But I had heard from several sources that this book was a lot like Hunger Games. I wasn't thrilled with Hunger Games (I know, I know...I'm the only one) so I put it off for a while. I started listening to it just after Christmas and I had a hard time getting into it at first. The first half of the book is about Tris's training as a member of the Dauntless faction in her society. There is a lot of seemingly frivolent violence for the sake of violence. Also, this book is a little long. BUT...

By the middle of the story, I was hooked. It was kind of like being on a roller coaster: the climb up to the top is a bit slow, but once you hit that peak, the rest of the ride is an adrenalin pumping thrill ride.

One of my biggest pet peeves with some books is the tendancy to skirt around or gloss over fight and battle scenes. Veronica Roth not only attacks these situations head on, but she describes them in gut wrenching detail. I often found myself clutching my armrest or clenching my teeth while listening. The characters are very believeable. I got completely sucked into Tris's thoughts and questions. An Tobias, her love interest, was dangerous and heroic and a perfect match for Tris. While the final conflict between them ends in a predictable way (I won't give it away here), because it was well-written and everything else happening was so intense, I was okay with it. I couldn't imagine it ending any other way.

Having just finished the book, I can honestly say Divergent deserves all the accolades it's been receiving. Ms. Roth's sequel Insurgent comes out on May 1st. I've already added it to my TBR list. I hope you will, too.

Violence:  High
Profanity:  None
Sex:   Mild (a little kissing)
Posted by Laurisa White Reyes at 12:01 AM