Debut YA author, Megan Miranda's book FRACTURE is a big hit. Publisher's weekly gave it a starred review, and readers everywhere are raving about it. I caught up with Megan recently and she was kind enough to provide a brief interview. Be sure to scroll down for a chance to win one of two signed bookplates! 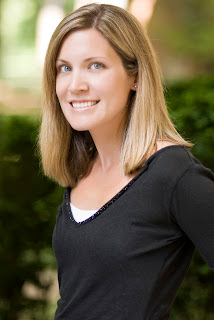 1.   Please tell us about FRACTURE in one sentence.
A girl survives eleven minutes trapped under the ice only to find she is now either drawn to death… or causing it.

2.  What inspired you to write this particular story?
I have a background in science, but the more I studied, the more I was drawn to the stories that science tries to explain but isn’t always able to: stories of people who were supposed to die, but live. I’ve also been fascinated with the brain for a long time—mostly because I think there’s so much that’s still not understood about it. I had a lot of questions (How much of us—and therefore the brain—is determined by our DNA? How much of us is something more? If someone changes after an injury, which person *are* they?) that inspired me to write the story.

3.  What was your favorite book when you were young?Number the Stars was my favorite—it was the first book to really stick with me, and I’ve never forgotten it. As I got older, I read a lot of mainstream thrillers (Michael Crichton was a favorite) and the darker classics.

4. What types of books do you enjoy reading now? Do you have a current favorite?

I’d say my tastes have gotten broader as I’ve gotten older. I’m still drawn to the darker stories (thriller or not)—especially stories where something is just a little off (as in Imaginary Girls), but I really enjoy reading most everything, depending on my mood. It’s impossible for me to pick a favorite right now…depending on my mood, it could be contemporary or dystopian or non-fiction. I will say that about 80% of the books I read now are YA.

5. Tell us a little about your publishing journey.
I wrote the first version of Fracture pretty quickly…and frantically. I started it in July of 2009 and started querying in October (note: I believe I queried two drafts too soon). But in November, I was so incredibly fortunate to sign with my agent (with the understanding that I still had a ways to go). I rewrote Fracture twice over the next 6 months. We sold to Walker/Bloomsbury in May, 2010, and I couldn’t be more thrilled.


6.  What is one thing about being published that you didn't expect.
To be honest, I wasn’t sure what to expect at all. I researched the publication process as best I could, but the whole thing has been a learning experience. The one thing that has surprised me the most has been the amount of support from other authors/writers/bloggers. I wasn’t online before my publishing deal much, mostly because I had very few hours to write each day, and I was very protective of those hours. I didn’t know anyone. But, wow, as soon as I joined, I was blown away by the support—and the friendships I’ve made—and I’m kicking myself now for not being a part of it sooner.

7. What can we expect from you in the future?
I have another standalone YA set to come out in early 2013. It’s a psychological thriller in the same vein as Fracture, in that it walks the line a bit between science and paranormal… but it’s also quite different. It’s about memories, friendship, and the fine line between the real and the imagined.

Thanks for having me!

Megan Miranda has two signed bookplates and some bookmarks to giveaway. To be elible to win, simply leave a comment below along with your email address so I can contact you.  Extra entries can be earned by tweeting this post or posting it on Facebook. Just let me know what you've done.
Posted by Laurisa White Reyes at 12:01 AM