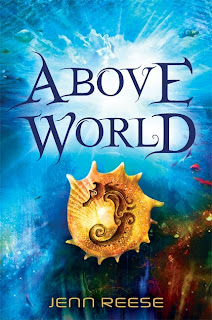 Debut author Jenn Reese writes science fiction and fantasy and has published short stories and a book for adults. She loves martial arts and has trained in kenpo, kung fu, tai chi, and traditional Chinese weapons. She lives in Los Angeles. She joins us today to discuss her book, Above World, which was released in February.

Thirteen-year-old Aluna has lived her entire life under the ocean with the Coral Kampii in the City of Shifting Tides. But after centuries spent hidden from the Above World, her colony’s survival is in doubt. The Kampii’s breathing necklaces are failing, but the elders are unwilling to venture above water to seek answers. Only headstrong Aluna and her friend Hoku are stubborn and bold enough to face the terrors of land to search for way to save their people.

But can Aluna’s warrior spirit and Hoku’s tech-savvy keep them safe? Set in a world where overcrowding has led humans to adapt—growing tails to live under the ocean or wings to live on mountains—here is a ride through a future where greed and cruelty have gone unchecked, but the loyalty of friends remains true.

“… fierce, take-charge Aluna is the kind of heroine who is easy to get behind.”—Publishers Weekly


1.  Please tell us about Above World in one sentence.
In a far-future Earth where humans have bioengineered themselves into mythological creatures in order to live in harsh climates, two young Kampii leave their underwater city on a quest to save their people.

2.  What inspired you to write this particular story?
The idea that mermaids would make great space captains. No, really! I was trying to come up with an idea for a short story, some sort of adventure in space. I asked myself what sort of person might make a good space captain, and the answer came to me right away: a mermaid! That spark led me to creating a world that combines science fiction and mythology.  I also knew I wanted an adventure story that felt like the kind of epic fantasy novels I gulped down as kid, but where the sense of wonder stemmed from science rather than magic. I thought that approach – along with an emphasis on bioengineering instead of spaceships -- might win over some readers who didn’t think they liked science fiction.

3.  What was your favorite book when you were young?
Whichever book I was reading at that moment. I had no filter for good or bad back then, but was simply a voracious reading machine impossible to satisfy. I bought books by the bag at flea markets. I asked for dozens of books every Christmas and finished most of them by New Year’s Day. I read everything with a Newbery sticker on it at school — A Wrinkle in Time, The Blue Sword, The Twenty-One Balloons, Phantom Tollbooth, Narnia… I read and re-read each of them. Later, when I could choose my own books, I picked them not by their covers, but by how thick their spines were and how many books were in the series. I wanted to escape from the real world and immerse myself in another one for as long as possible. Some books I came back to again and again were: The Once and Future King, The Belgariad series, Riftwar Saga, Dragonlance, Lord of the Rings, everything by Piers Anthony, The Warlock in Spite of Himself, the Elrik series, and oh-so-many more. I often long to return to that mindset, the one where I have no critical brain at all, but am simply looking to be swept away and eager to let any author take me.

4. What types of books do you enjoy reading now? Do you have a current favorite?
My mood changes with the wind! Some days I’m looking for epic fantasy — recently Sabriel by Garth Nix and Finnikin of the Rock by Melina Marchetta filled that need nicely. For middle-grade reads, the Kat, Incorrigible series by Stephanie Burgis is a constant favorite — fabulous magical adventures set in Austen’s England — and for adult books I’m eagerly awaiting the release of the contemporary rural fantasy Wide Open by Deborah Coates. Right now, while I’m working on a new book, I’m reading more graphic novels. I can recommend Zita the Spacegirl by Ben Hatke and Page by Paige by Laura Lee Gulledge.

5. What can we expect from you in the future?
Adventure! Martial arts! Wild monsters and first loves! Which means I’ve just turned in book two in the Above World series and am hoping to sell the third. But really, everything I write will be an adventure of sort or another. I can promise you that.
Thanks so much!