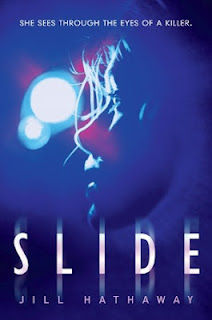 Vee Bell is certain of one irrefutable truth—her sister's friend Sophie didn't kill herself. She was murdered.
Vee knows this because she was there. Everyone believes Vee is narcoleptic, but she doesn't actually fall asleep during these episodes: When she passes out, she slides into somebody else's mind and experiences the world through that person's eyes. She's slid into her sister as she cheated on a math test, into a teacher sneaking a drink before class. She learned the worst about a supposed "friend" when she slid into her during a school dance. But nothing could have prepared Vee for what happens one October night when she slides into the mind of someone holding a bloody knife, standing over Sophie's slashed body.
Vee desperately wishes she could share her secret, but who would believe her? It sounds so crazy that she can't bring herself to tell her best friend, Rollins, let alone the police. Even if she could confide in Rollins, he has been acting distant lately, especially now that she's been spending more time with Zane.
Enmeshed in a terrifying web of secrets, lies, and danger and with no one to turn to, Vee must find a way to unmask the killer before he or she strikes again.
SLIDE is a new young adult paranormal suspense novel by debut author Jill Hathaway. She has sent some awesome signed bookmarks to giveaway to some lucky readers. Details on how to enter the drawing are below. In the meantime, enjoy the trailer, author interview & my review of SLIDE!
AUTHOR INTERVIEW:
1.  Describe Slide in one sentence. She sees through the eyes of a killer.
2.  What inspired you to write this story? I actually wrote it for NaNoWriMo a few years ago. I was just trying to write a book that my most reluctant readers would enjoy. (I'm a high school teacher.)
3.  How Vee developed this "power" to slide into other people's bodies is never explained in the book. Can you offer any additional insight into how you came up with the idea? Originally I wanted to write a story in which the main character found herself standing over a dead body but had no idea how she got there. From there, the idea of sliding was born.
4.  As an author of Young Adult fiction, do you read a lot of YA? If so, what are some of your favorite titles/authors? I absolutely love YA. A few of my current favorites are John Green, Courtney Summers, Nova Ren Suma, Megan Miranda, and Cynthia Hand.
5.  Share a little about your road to publication. I didn't start writing seriously until a few years ago when I participated in NaNoWriMo. After I finished my first (truly awful) book, I decided to query agents. Needless to say, I didn't get representation with that book. But I tried again the next year with SLIDE and caught the interest of a few agents. After that, I knew I was onto something special.
6.  What can we expect from you in the future? Thank you for asking! IMPOSTOR, the sequel to SLIDE, will be out next spring. In it, Vee realizes someone else has been sliding into her and using her to do their dirty work.
MY REVIEW:

Fast-paced riveting murder mystery with just enough paranormal thrown in to make it stand out. When Vee passes out, she slides into other people's bodies. She can see and hear what they see and hear, but cannot read their minds. When she slides into the body of a murderer, Vee ends up in a race against time to prevent her sister from becoming the next victim.

SLIDE is quick read. Straight forward story written in first person present tense. The characters are typical high school stereotypes - cheerleaders, jock, etc. - but Hathaway manages to make each character believable and three dimensional. No one is quite what they seem at first glance. There are a few details that are predictable, but not enough to detract from the overall enjoyment of the story. I would love to see these characters again, especially Vee and Rollins. As Vee gains more control over her ability, it would be cool to see her solve more mysteries.

The book does contain some foul language ("b" & "sh" words mostly). There is some discussion of teen sex, but none actually occurs in the story itself. And there is a brief description of a murdered girl, but otherwise the violence is minimal. I enjoyed SLIDE thoroughly and had a hard time putting it down the closer I got to the end.


GIVEAWAY TIME!!!
(2) winners will each receive a SLIDE bookmark signed by the author. To be eligible, just leave a comment & your email below!
This giveaway ends on June 13th!
Posted by Laurisa White Reyes at 12:01 AM