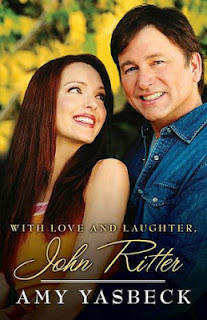 Description (from Amazon):
With Love and Laughter is actress Amy Yasbeck’s most enduring memory of the life she shared with her husband, John Ritter. He was one of America’s most popular and beloved film and television actors. We welcomed him into our homes weekly with his Emmy Award–winning portrayal of Jack Tripper on Three’s Company and his hit comedy 8 Simple Rules for Dating My Teenage Daughter. On September 11, 2003, John Ritter’s death from an undiagnosed aortic dissection, at the age of fifty-four, shocked and saddened not only his family and friends but also his millions of fans around the world. In this celebration of the life she shared with John, Yasbeck gives an emotionally honest account of navigating the shock and heartbreak of her family’s sudden loss. She honors his memory by recounting the lessons learned from her husband and his unique approach to life. She encourages us to enrich our own lives, as John did, by joyfully acknowledging our connectedness to one another. The tragedy of his untimely and avoidable death holds its own valuable lessons: life-saving ones. In 2007, John’s brother, Tom, empowered with the correct information about aortic aneurysm and dissection’s familial link, was properly diagnosed and his aneurysm was treated successfully. Knowing who is genetically at risk for this condition enables us all to avoid being blindsided by this insidious and often deadly disease. Here is an account of Yasbeck’s call to action for the public and medical community alike, culminating in the formation of the John Ritter Foundation for Aortic Health and the Ritter Rules. In this powerful memoir Amy Yasbeck shares her deeply personal and ultimately hopeful journey of surviving the devastating loss of her husband. Yasbeck looks back with anecdotes and memories from both John’s life and her own. Here are the unforgettable times she shared with a man who was adored for finding humor in everyday encounters, never failing to energize and entertain everyone around him. His philosophy was summed up by his favorite autograph for his fans, With Love and Laughter, John Ritter. Amy Yasbeck’s powerful story reminds us that love never dies . . . and the laughter doesn’t have to end. 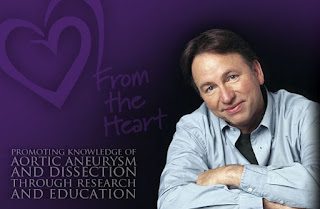 My Review:
I read this book in a week, which is probably a record for me since I am such a slow reader. It normally takes me a month or more to finish a book, but I couldn't put this one down. Part of why is how I came by it.

Not long ago I did a book signing at a bookstore in Los Angeles along with fellow debut authors Anne Nesbet and Jenn Reese. Prior to the event I walked around the store introducing myself to people and inviting them to stay for the signing. I met a nice young lady named Stella who was there with her mom to pick out a book to read. I was impressed with Stella. She had impeccable manners and loved books. She also was interested in writing, so we hit it off. She found her mom and brought her over. We chatted for a while while my friends and I signed our books for them. Then they said good-bye and left.

After the event was over, the owner of the store presented each of us with a copy of With Love and Laughter, John Ritter personalized to each of us by name by Amy Yasbeck, the author. Turns out the girl and her mother were John Ritter's wife and daughter.

Their gift touched me. I remember hearing about John Ritter's passing on my car radio and not thinking much of it. I was not much of a TV watcher, and as a kid I wasn't allowed to watch Three's Company, the show that made John Ritter a household name for just about everyone else. But after meeting his family, and then reading the book, I was struck with the fact they had lost a husband and father way too soon.

Ms. Yasbeck's story of their life together is both hysterical and endearing. She allows us to see the human side of John Ritter, a man who loved his kids and his wife more than anything. Not knowing much about him before reading it, I felt that I was being introduced to him for the first time and that the person I was getting to know wasn't some megastar celebrity, but a regular guy with a great sense of humor.

My favorite moment in the book was when the author described watching John snuggle with Stella in bed on the morning of her fifth birthday, not knowing that it would be there last moment together. I laughed and cried at the same time. The scene was funny, but heartbreaking, too. Because it was later that day, on September 11, 2003 that John Ritter died of an aortic dissection, or tear in the aorta.

I appreciate that Ms. Yasbeck takes the time to explain John's disease to us because my father-in-law is an aortic dissection survivor. So hearing about their experience really  hit home to me and I'm grateful to know about the foundation she founded in her husband's honor: The John Ritter Foundation for Aortic Health.

I want to thank Ms. Yasbeck for her kind and generous gift. I hope it won't be the last book she writes. She has a real knack at language and humor. In fact, I think she'd make a marvelous novelist.