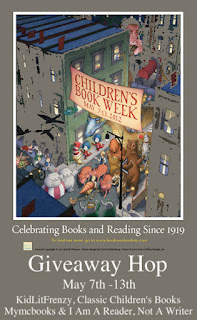 Welcome to the CHILDREN'S BOOK WEEK GIVEAWAY HOP hosted by I Am A Reader, Not A Writer, Kidlitfrenzy, Classic Children's Books & Mymcbooks.

As many of you  know, my debut novel THE ROCK OF IVANORE hits the shelves on May 15th. Since it is a book for children and teens, I am using this hop as shameless self-promotion opportunity. My prize:

A SIGNED ARC OF
THE ROCK OF IVANORE!
All you have to do to be eligible to win is follow this blog. But you can earn more entries by liking my Facebook page, subscribing to my newsletter, leaving a comment, and friending me on Goodreads list. Just fill out the Rafflecopter form at the end of this post. 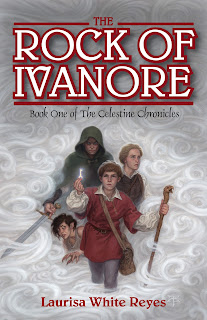 For an additional chance to win a signed hard cover copy of my book, enter my Goodreads giveaway, which ends on May 15th. By entering the Goodreads contest, you also earn another entry for the ARC. In the meantime, enjoy the prolog, below.

This hop will run from May 7th to May 13th. Be sure to visit all the other participating blogs, each giving away an awesome prize, too!


The old enchanter rose from his cot, his joints creaking like rusty hinges. His sleep had been troubled and thoughts of the days ahead worried him. Taking care not to wake his apprentice, Zyll went to the table in the center of the room, though his legs were so stiff that even traveling the width of his cottage required the use of a walking stick.  With his free hand, he took a copper bowl down from a shelf and set it on the table.  He grinned at the bucket of water on the hearth, grateful that the boy had remembered to fill it this time.

Zyll ladled water into the bowl, then peered at his reflection in it.  How changed he looked, how unlike the man he used to be.  His hair, once thick and dark, had thinned and grown white.  The skin around his mouth had creased, but his eyes still glowed with the vibrancy of youth. One thing, at least, had remained the same.

He laid his walking stick across the table, then leaned closer to better view the image before him. The water darkened and another face replaced Zyll’'s reflection, a younger man not altogether human - a half-breed.

The image widened. Crouching in a dark corridor the half-breed crept from shadow to shadow. Slipping past two sentries, he entered a small chapel. He hurried to the altar and released a hidden latch that opened a small door near its base. Zyll watched as the half-breed removed a scroll concealed within and carefully secured it beneath his cloak.

Just then, the chapel door flew open with a tremendous shudder.  There, framed in torchlight, stood a man with red hair and seven man-like beasts with hairy faces pocked with repulsive scars.

The redheaded man charged angrily into the room, his sword coming down in a wide, rapid arc.  The half-breed hastily drew his sword just in time to deflect the blow, and then countered with his own.  His blade tasted flesh, and the redheaded man collapsed to his knees, his hands grasping the side of his bloody face.

The half-breed spied a small object on the floor and managed to snatch it up before the beasts attacked. Though he fought them with inhuman strength, they soon drove him to the wall.

Cornered and outnumbered, the half-breed turned to the window and gazed down.  The image in the bowl shifted and Zyll saw what the half-breed saw: angry ocean waves beating against the rocks far below.  Suddenly the waves rushed up towards him, and Zyll realized that the half-breed had leapt from the window.  Zyll watched him fall, and as he fell he twisted his body to look up to the sky.  For one fleeting moment, before he plunged into the sea, his inhuman cat eyes met Zyll’'s.

The enchanter’s breath caught in his throat and he stumbled back.  When he looked in the bowl again, the image had vanished.

Zyll dropped into a chair and rested his weary arms on the table.  He glanced at the fair-haired boy who slept on, then in a choked whisper said, "So it begins."