- Win a copy of DARWEN ARKWRIGHT by A.J. Hartley (Ends 10/8)
- Interview w/ Tiffany Schmidt, author of SEND ME A SIGN

Boy, do I have a surprise for all of you! Popular middle grade and young adult author, Margaret Peterson Haddix is my special guest today. Wow! Margaret is the author of 30 books including The Shadow Children series, Running Out of Time, Dexter the Tough and many more.

I had the supreme pleasure of meeting Margaret at a recent Bridge To Books event in Pasadena, CA. The truth is that when I got the flier in my inbox and saw her name, I dropped everything in my schedule and drove the hour to get there, dragging three of my five kids along with me. How could I pass up a chance to meet one of my favorite authors?

When I arrived, I chatted with the other participating authors including Shannon Messenger (Keeper of the Lost Cities), Lisa McMann (The Unwanteds) and Helen Stringer (Spellbinder). The whole line-up was pretty amazing! And then I spotted a familiar face. I held out my hand to introduce myself, and before she could say "Hi. I'm Margaret..." I said, "You're Margaret Petereson Haddix! I'd recognize you anywhere."

Alright. I admit. I was a bit awestruck. As a new author myself, Margaret is an inspiration and example of where I want to be one day. As she gave her presentation, I was most impressed by how "normal" she is. I say that often about famous authors I meet, how "normal" they all are. I love that about children's book authors. Being a celebrity never goes to their heads. They are always kind, gracious and modest about their success.

I told Margaret about my own book and about my blog. She accepted my invitation to be interviewed and handed me her card, a simple white rectangle with just her name and email in black print. I guess I expected something more befitting her fame, but this unadorned card seemed so perfect for such a nice, down to earth person like Margaret Peterson Haddix.

I am very happy to introduce her newest release, and to welcome her as our guest today. To make this even more fun, I have a SIGNED COPY OF FOUND, the first book in the Missing series as a giveaway. Be sure to check out the details at the end of this post. 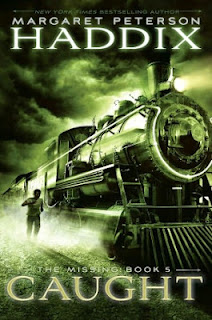 
Jonah and Katherine are accustomed to traveling through time, but when learn they next have to return Albert Einstein’s daughter to history, they think it’s a joke—they’ve only heard of his sons. But it turns out that Albert Einstein really did have a daughter, Lieserl, whose 1902 birth and subsequent disappearance was shrouded in mystery. Lieserl was presumed to have died of scarlet fever as an infant. But when Jonah and Katherine return to the early 1900s to fix history, one of Lieserl’s parents seems to understand entirely too much about time travel and what Jonah and Katherine are doing. It’s not Lieserl’s father, either—it’s her mother, Mileva. And Mileva has no intention of letting her daughter disappear.


1      Describe CAUGHT in one sentence.
In CAUGHT, middle-schoolers Jonah and Katherine get zapped back to the year 1903, and face a daunting challenge: Is it possible for them to both fix time and rescue Albert Einstein’s secret daughter?

2     CAUGHT is the fifth book in the Missing series. Tell us about the series as a whole.
The Missing series begins with 36 babies mysteriously showing up on an otherwise abandoned airplane. Siblings Jonah and Katherine and their friends face an FBI coverup, doublecrossing adults, and risks to time itself as they try to solve the mystery and then travel through time rescuing various children endangered by their native time periods, ranging from the 1400s on.

3.      What inspired you to write Missing?
I first became intrigued by the notion of a mysterious planeload of babies. Then, once I figured out who those babies should be, I was fascinated by the idea of writing about kids who were raised in the twenty-first century getting to explore dangerous time periods of the past.

4.      You've published 30 books, including the popular Shadow Children series. Which book(s) are particularly special to you and why?
The easy answer is that all of them are special. That’s also true, although the books tend to be special for different reasons. For example, Among the Hidden, the first Shadow Children book, is special partly because it came so naturally to me and I felt like I knew the main characters, Jen and Luke, so thoroughly right from the start. Another book, Uprising, is special because it was very challenging to write, and I was constantly wondering if I could carry off the balance between the actual history and the three differing characters at the heart of the story, Bella and Yetta and Jane. I could probably go on this way, mentioning every single one of my 30 books!

5.      What books did you enjoy reading when you were younger and how have they influenced you as a writer?
I was a huge reader as a kid, and read everything I could get my hands on. I think the variety of reading material—sci fi, realistic contemporary fiction, historical fiction, mysteries, biographies, etc.—influenced me in that I have now also written books in a variety of genres, and enjoy bouncing back and forth between various types of books as a writer as well as a reader. Some of my favorite books were older ones that in some cases had belonged to my mother or grandmother—ones like Little Women, Rebecca of Sunnybrook Farm, A Little Princess, Anne of Green Gables, etc. I liked a lot of the character-driven books, where reading felt like hanging out with a beloved friend. But I also liked more adventurous stories, many of which I borrowed from my brothers’ bookshelves. Some books I remember particularly enjoying that were adventures with girls as main characters were From the Mixed-Up Files of Mrs. Basil E. Frankweiler, by E.L. Konigsberg; The Long Journey, by Barbara Corcoran; and She the Adventuress, by Dorothy Crayder.

6.      Could you share a little about your initial road to publication?
I studied creative writing in college, but also studied journalism because I thought it was a safer bet in terms of allowing me to support myself after college. So I worked as a newspaper reporter in Indianapolis for four years, which gave me a lot of valuable writing experience and also exposed me to a lot of interesting people and ideas. When my husband’s job took us to a small town in Illinois where there wasn’t much job opportunity for me, I switched to teaching part-time at a community college and told myself that this was my chance to use the rest of my work time for writing fiction. Like most writers, I endured way more of the “submit—then get rejected” cycle than I wanted to. (Because, who wants to endure any of it?) After about two years, I got an agent; a year later, Simon and Schuster accepted my first two books for publication: Running out of Time and Don’t You Dare Read This, Mrs. Dunphrey.

7.      What can we expect from you in the future?
I have a stand-alone book called Game Changer coming out October 16. I had a lot of fun with the premise of the book, where everything about school becomes sports, and everything about sports becomes school. Then I’ll have two books coming out in fall 2013: Risked, the sixth book in the Missing series; and Full Ride, which is about a girl dealing with her father being sent to prison for white-collar crime. The girl and her mother run away, and the girl thinks it’s only because of the shame they faced because of her father’s crimes. Only, it turns out that there are other reasons behind their running….

I have one copy of FOUND, the first book in The Missing series, signed by Margaret Peterson Haddix! To be eligible to win, just fill out the rafflecopter before. U.S. entries only, please.
This giveaway will end on  October 22nd.
a Rafflecopter giveaway
Posted by Laurisa White Reyes at 5:00 PM