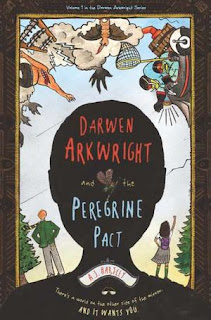 Eleven-year-old Darwen Arkwright has spent his whole life in a tiny town in England. So when he is forced to move to Atlanta, Georgia, to live with his aunt, he knows things will be different–but what he finds there is beyond even his wildest imagination!

Darwen discovers an enchanting world through the old mirror hanging in his closet–a world that holds as many dangers as it does wonders. Along with his new friends Rich and Alexandra, Darwen becomes entangled in an adventure and mystery that involves the safety of his entire school. They soon realize that the creatures are after something in our world–something that only human children possess.

1. Describe your book in one sentence.

An eleven year old misfit boy finds that the odd mirror in his closet turns, after sundown, into a door beyond which lies a strange, beautiful world full of monsters bent on getting out and taking over... 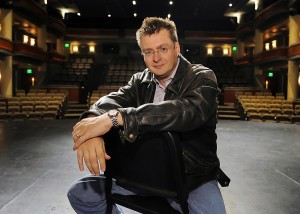 2. What inspired you to write this story?

I've been writing adult fiction for a long time but never lost my love for the books I read as a kid. Now I have a son of my own and wanted to write something for him that would convey something of that sense of wonder I felt when I first started losing myself in books. Then I had a dream which became the first scene in which I spotted a bird n an indoor mall, only to realize that it wasn't a bird at all but something much stranger and that, when followed, it ducked inside a shop full of mirrors and somehow hid inside one of them. This became the first sequence of the book!

3. What books did you enjoy reading when you were younger and how did they influence you as a writer?

I loved The Lion the Witch and the Wardrobe and the other Narnia books, and they obviously had an influence on this story, but I also loved reading mysteries set in the ordinary world and DARWEN owes a lot to that tradition too, since most of the book takes place in Atlanta, GA, where Darwen and his friends live, particularly at his school. I loved the awe and magic of fantasy literature but I like a little real grit too. That sense of the ordinary and everyday helps me anchor my story and, most importantly, my characters in the world we all actually live in. I need that so that the book doesn't float off into neverland.

4. You published several adult titles in the past. What led to your writing middle grade fiction?

I've always been drawn to write whatever I was interested in reading (I'm an agent's nightmare). I can't imagine only ever writing one kind of book because there's so much great stuff out there in so ma ny new and interesting genres. When I read something I really like it always makes me want to write something in the same area, though, of course different and inflected by my own interests and passions. I had that feeling when I read the first Harry Potter novel a decade or more ago. I didn't even have a son then, but I knew I wanted to write this kind of story some day.

5. What can we expect from you in the future?

Ha! Mayhem, chaos and confusion. This much I know: I have the second DARWEN book out in late November (Darwen Arkwright and the Insidious Bleck) and the third in the summer of 2013 (Darwen Arkwright and the School of Shadows [I think]). After that, I'm not sure. I have a slightly older YA ghost story which I'm polishing now, and I'll almost certainly be doing another thriller based on a Shakespeare play: the last one was Macbeth, this will be Hamlet. After those, I have no idea. That should probably be scary but I find it oddly invigorating. Adventure and discovery ahead :)


Mr. Hartley has graciously provided a copy of his book for one lucky winner. To be eligible to win, just fill out the rafflecopter form below.
This giveaway will run through October 8th.


a Rafflecopter giveaway
Posted by Laurisa White Reyes at 1:56 PM