THE CHILDREN'S BOOK REVIEW: THE ROCK OF IVANORE GIVEAWAY

The Children's Book Review, the premier online review publication, is hosting a month long giveaway of THE ROCK OF IVANORE. To enter the drawing, just fill out the form on their website. The giveaway will run through the end of the month. Here is the link:   http://www.thechildrensbookreview.com/weblog/2012/09/giveaway-the-rock-of-ivanore-book-one-of-the-celestine-chronicles.html 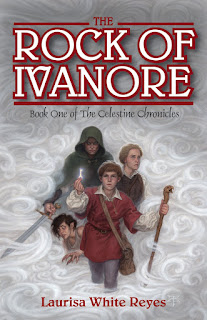 About THE ROCK OF IVANORE:

Middle readers will find that The Rock of Ivanore fits nicely among the traditional fantasies they so enjoy. They will also appreciate its fresh and inventive take on the genre.


“Reyes deftly develops her plot and characters and firmly holds readers' attention throughout this exciting and surprising tale.” – School Library Journal
“Young readers…will delight in this opening title in The Celestine Chronicles series, which delivers a fantasy adventure for a reluctant readership.” – Booklist

“Marcus is a hero who engages challenges in a way that is both human and admirable.” – Publisher’s Weekly
“Reyes’ debut novel is a gripping fantasy just right for younger readers who clamor for adventure but are not quite ready for Lloyd Alexander’s ‘Grey King’ or J.R.R.Tolkien’s ‘Lord of the Rings.’” – Deseret News
Flamingnet Top Choice Award (scored 9 out of 10)
"This is a swift and compelling epic that readers of high fantasy will love!"
— Tony Abbott, author of The Secrets of Droon


Add THE ROCK OF IVANORE to your Goodreads list!
http://www.goodreads.com/author/show/5244611.Laurisa_White_Reyes
Posted by Laurisa White Reyes at 11:42 AM