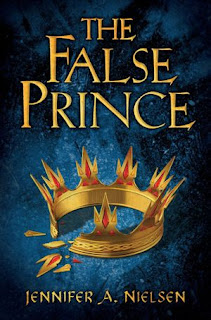 THE FALSE PRINCE is the thrilling first book in a brand-new trilogy filled with danger and deceit and hidden identities that will have readers rushing breathlessly to the end.

In a discontent kingdom, civil war is brewing. To unify the divided people, Conner, a nobleman of the court, devises a cunning plan to find an impersonator of the king's long-lost son and install him as a puppet prince. Four orphans are recruited to compete for the role, including a defiant boy named Sage. Sage knows that Conner's motives are more than questionable, yet his life balances on a sword's point -- he must be chosen to play the prince or he will certainly be killed. But Sage's rivals have their own agendas as well.

As Sage moves from a rundown orphanage to Conner's sumptuous palace, layer upon layer of treachery and deceit unfold, until finally, a truth is revealed that, in the end, may very well prove more dangerous than all of the lies taken together.

An extraordinary adventure filled with danger and action, lies and deadly truths that will have readers clinging to the edge of their seats.


Author Jennifer Nielson visits with us today to share a little about her new book. Don't miss the book trailer below and a chance to win a copy of THE FALSE PRINCE at the end of this post!


1.  Describe The False Prince in one sentence.

A clever and defiant orphan is forced into a contest where he must either impersonate the long-lost prince, or else be killed.

I’d had the general concept for the story for a long time, but my attempts to write it always fell flat because I didn’t have a protagonist strong enough to bear the weight of the plot. One day I was listening to an Eddie Vedder song called Guaranteed, and a line jumped out at me that said, “I knew all the rules, but the rules did not know me, guaranteed.” From that line came this idea of a tough kid caught up in a very dangerous game, but one in which he is very quietly rewriting all of the rules. 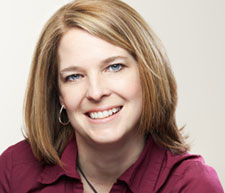 3.  You've had several books published. Could you share a little about your initial road to publication?

My debut book was an early MG story called Elliot and the Goblin War. Early in the submission process, I posted a question to a list serve about a revision an agent had requested. Unbeknownst to me, on that same list was a new agent named Ammi-Joan Paquette. She contacted me in private to say that she liked the general idea of my story and that if things didn’t work out with the agent I was already submitting to, that she would love to see the project. I did end up eventually submitting to her and she subsequently offered representation. Within two weeks of her first sending the project out to publishers, Sourcebooks made a three-book offer. Nine months later she sold The False Prince as another trilogy series to Scholastic. I am infinitely lucky to have her for an agent.

4.  What books did you enjoy reading when you were younger and how have they influenced your writing?

I’ve always been a reader, and my book choices were pretty varied across the genres, but the books I loved most were always more adventurous. My mom really wanted me to love the sweeter, more traditionally “girl” books like the Little House on the Prairie series, but every time she put one on my reading stack (and yeah, I always had a stack!), I just moved it to the bottom. My all time favorite book as a child was The Wolves of Willoughby Chase. I also loved the Hardy Boys books (but not Nancy Drew, because she never seemed to get in any real trouble) and The Outsiders. Their themes of danger, challenges, and suspense have definitely seeped into my own writing.

There is a lot that I’m really excited about – it’s hard to wait for everything to unfold!

The sequel to The False Prince will be released in April 2013. It’s called The Runaway King and I hope readers will find it to be just as fun as the first book.

Also, in a follow-up to its very successful 39 Clues books, Scholastic has just released a new multi-platform series called Infinity Ring. It’s a fantastic time travel adventure through some of the great moments in history. James Dashner, who may be known to many of your readers, was the architect for the series, wrote Book 1, and will write the final book. I get to write Book 6, which is particularly exciting to me since there are several great authors involved, and a fun story to work with, but I’m also a sort of closet history geek.

So I guess what I’m saying is no, I’m not even close to being caught up on my laundry.

Jennifer has graciously provided a copy of THE FALSE PRINCE to giveaway to one lucky reader! To be eligible to win, please fill out the rafflecopter form below. U.S. entries only, please.
This giveaway will end on November 2nd.
a Rafflecopter giveaway
Posted by Laurisa White Reyes at 12:00 AM