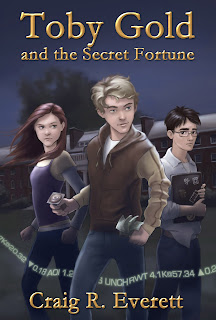 
Toby Gold and the Secret Fortune is an urban fantasy, where a secret magical world of money and intrigue co-exists with the same everyday world we all know.  Toby grows up in Wallingford, Connecticut, not knowing about this secret society until one day when he discovers secret messages encrypted into the stock ticker “crawl” that moves along the bottom of the screen on the financial news channel.

Toby’s shock only grows worse when he realizes that the secret messages are directed to him!

His unique abilities with math and money have been noticed by the wrong people, and Toby is quickly sucked into a high-stakes life and death financial conspiracy, that he is only able to resolve by using his amazing skills with money.

Author Craig Everett shares some insight into his book in today's interview. Be sure to to get the details on how to win a poster and bookmark at the bottom of this post. 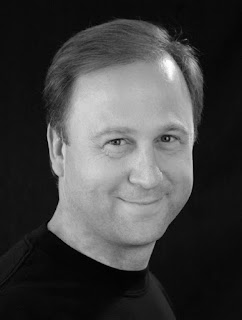 1.       Tell us about Toby Gold and the Secret Fortune in one sentence.

Toby Gold is the story of a boy whose magical talent with money is noticed by the wrong people, who then pull him into a life-and-death financial conspiracy.

Being a college professor and also being involved in financial literacy efforts, I’ve been a bit disappointed in the actual statistical results of financial literacy programs.  The results have been mixed.  Despite a lot of programs and efforts, youth financial literacy has not made dramatic improvements.
So, I tried to brainstorm additional ways, beyond classroom instruction, that these concepts could be introduced and reinforced.  Since fantasy novels are hugely popular with middle-grade kids, I thought this might be a good alternative source of financial education – or at least help them learn to speak the language of business and money.

The story of Toby Gold started with the simple idea of a kid that is good with money.  The rest of the story emerged gradually in my imagination as I started reflecting on it.  Once the general idea for the storyline gelled in my head, I felt compelled to get it all written down, which took me about 3 months.

3.       What books did you enjoy reading when you were younger and how have they influenced you?

4.  Name one person who has had an impact on you as a writer.

I’m going to cheat and name two.  F. Scott Fitzgerald is one of my most revered writers as long as I overlook the occasional inappropriate subject matter.  He can get his point across beautifully in very few words while simultaneously packing his prose full of symbolism.  It’s amazing.

Brandon Sanderson is my other biggest influence.  I believe that he may well be the greatest fantasy writer of all time.  He is hands-down the best creator of complex and original fantasy worlds.

My first draft of Toby Gold took about 3 months to write.  I thought it was a masterpiece.  It wasn’t.  Once I got feedback from an actual professional writer, I realized that it needed major revisions.  Once those revisions were done, I began querying literary agents.  It took nearly a year (while simultaneously re-writing again and again), but finally I was able to land a big-shot New York agent.

Once I got an agent, I thought my journey to publication was over.  It wasn’t.  Based on my agent’s comments, I had to do another full re-write before she was willing to start submitting the manuscript to her editor contacts.

The good news is that my manuscript has been read by editors at most of the major publishing houses.  The bad news is that most of them had similar comments.  To paraphrase, “I really loved the story and the writing is solid.  Unfortunately, we don’t quite know how to market this sort of work.”

Ultimately, my agent gave up.

So then I started submitting the manuscript to indie/regional publishers.  Finally, an indie publisher up in Oregon (Wyatt-McKenzie) was willing to pick it up.  In fact, since this book is such a unique concept, I am working with them to set up a special imprint, named Fiscal Press, to publish this book and other quirky business titles.

Assuming that Toby Gold and the Secret Fortune is successful, there will be more books in the series.  The next one will be called Toby Gold and the Order of the Invisible Hand.  Economists in your audience will recognize the shout-out to Adam Smith, one of the fathers of classical economics.  He coined the phrase “invisible hand” to describe how free markets achieve equilibrium without being explicitly controlled.

I have 2 sets of signed bookmarks and posters to giveaway. To be eligible to win, just fill out the rafflecopter form below.
The giveaway will run through October 29th.

a Rafflecopter giveaway
Posted by Laurisa White Reyes at 2:51 PM