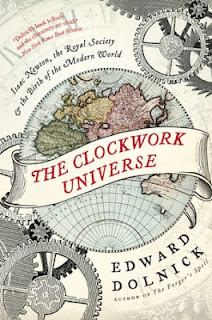 THE CLOCKWORK UNIVERSE: ISAAC NEWTON, THE ROYAL SOCIETY, AND THE BIRTH OF THE MODERN WORLD
by Edward Dolnick
HarperCollins
416 pp.
Non-Fiction


In a world of chaos and disease, one group of driven, idiosyncratic geniuses envisioned a universe that ran like clockwork. They were the Royal Society, the men who made the modern world.

At the end of the seventeenth century, sickness was divine punishment, astronomy and astrology were indistinguishable, and the world’s most brilliant, ambitious, and curious scientists were tormented by contradiction. They believed in angels, devils, and alchemy yet also believed that the universe followed precise mathematical laws that were as intricate and perfectly regulated as the mechanisms of a great clock.

The Clockwork Universe captures these monolithic thinkers as they wrestled with nature’s most sweeping mysteries. Award-winning writer Edward Dolnick illuminates the fascinating personalities of Newton, Leibniz, Kepler, and others, and vividly animates their momentous struggle during an era when little was known and everything was new—battles of will, faith, and intellect that would change the course of history itself.

This book was amazing! I listened to it on my ipod (via Audible). The narrator was terrific, but the story itself kept me hooked all the way through. This book tells the stories of the greatest minds of the 17th century: Copernicus, Kepler, Galilieo, Newton and a few others. It revolves mostly around Isaac Newton and his discovery of the Law of Gravity, but to get there we are led through the lives and discoveries of these other scientists, as well. Not only do we get a glimpse of them as men and individuals, but we also learn about each scientific theory and law in language just about anyone can understand. I was blown away by the definition of calculus, something I never thought I'd "get."

A couple of years ago I listened to the book E=MC2: A Biography of the World's Most Famous Equation. Both of these books utilize a similar style and pattern in presenting scientific knowledge along with a historical narrative. I think these two books really go hand in hand. If you like one, you'll like the other, too.

The Clockwork Universe is one of the best, if not the best book I've read this year.