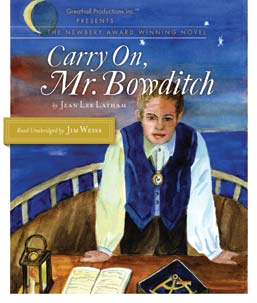 
Readers today are still fascinated by "Nat," an eighteenth-century nautical wonder and mathematical wizard. Nathaniel Bowditch grew up in a sailor's world—Salem in the early days, when tall-masted ships from foreign ports crowded the wharves. But Nat didn't promise to have the makings of a sailor; he was too physically small. Nat may have been slight of build, but no one guessed that he had the persistence and determination to master sea navigation in the days when men sailed only by "log, lead, and lookout." Nat's long hours of study and observation, collected in his famous work, The American Practical Navigator (also known as the "Sailors' Bible"), stunned the sailing community and made him a New England hero.


Carry On, Mr. Bowditch won the Newbery Award in 1956 and it the true story of Nat Bowditch who revolutionized navigation at the turn of the nineteenth century. The book is for younger readers and is therefore a simple and straightforward narrative. The story begins when Nat is just six years old and ends more than twenty years later once Nat has become a ship's captain and published a book on navigation.

While the story started off a little slow, it didn't take long for me to get hooked. I actually listened to the audio version of this by Greathall Productions. The performance of the narrator was wonderful and really drew me into Nat's story. His life was filled with loss and challenges, but he was a determined student of mathematics, science and languages. The last chapter of the book kept me on pins and needles, it was so well-written and very tense.

This would make a great read-aloud book for parents and children to share together, though I recommend the CD which can be purchased HERE. There is enough adventure in this tale to hold the attention of kids and adults alike to the very end. I give it 4 1/2 stars.

Profanity: None
Violence:  Mild
Sex:  None
Posted by Laurisa White Reyes at 8:00 PM