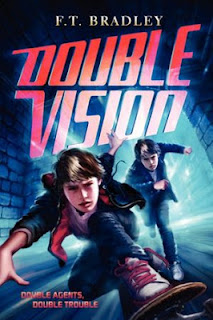 One's a Secret Agent, One's Not.

Twelve-year-old Linc is a trouble-maker with a dilemma. His antics on a recent school field trip went way overboard, landing his already poor family with a serious lawsuit. So when two secret agents show up at his house, Linc is eager to take them up on their offer to make the lawsuit disappear. They just need one tiny favor.

Turns out Linc looks exactly like one of their top kid agents—an agent who's vanished during a vitally important mission. But no debriefing can prepare Linc for how dangerous the mission really is. It's too bad he isn't a black belt, a math genius, or a distance runner like his agent double. He'll need all those skills and more if he hopes to make it out of this mission alive. . . .

1. Describe Double Vision in one sentence.


When 12 year-old Linc Baker replaces a lookalike junior secret agent for a mission in Paris, he has only his quick wits to crack secret codes and find a dangerous painting--before the bad guys do.

2.  What inspired you to write this story?
Linc has been the driving force behind this story from the beginning--his character was always very strong in my mind. I developed the Double Vision series with my agent at first, and later with my editor at Harper Children's. We all had the same vision, really: a fun adventure that reluctant (boy) readers could really sink their teeth into. Reader feedback has been overwhelmingly positive, which is the best affirmation. 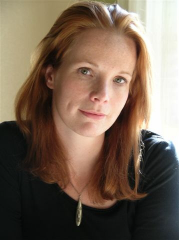 3.  As a homeschooling mother of two children, where do you find the time to write?
A have a very strict schedule...  I usually do my writing very early in the morning (5 a.m., sometimes earlier) before the kids are up. Then we do school work until just after lunch. I work on emails, and other commitments like interviews and business-related stuff in the afternoon. I go to bed early and don't cook a lot :-)
4.  What books did you enjoy when you were growing up and how have they influenced you as a writer?
I was a big Pippi Longstocking fan, and Roald Dahl was a favorite too. Later, I read all of Agatha Christie's novels, and that's when I became hooked on mysteries and thrillers. I like the levity of those kids' books, but the stakes of mysteries/thrillers. I hope Double Vision blends the two just right.
5.  Share a little about your road to publication?
Gosh, it took me so long to get here... I wrote short crime fiction for years, and then moved to YA mystery novels. I got close a few times with those, but no book deal. It wasn't until my current agent suggested I write middle-grade that things finally fell into place. In the end, I'm glad the book deal was with Linc as a main character. The Double Vision series is so fun to write.
6. What can we expect from you in the future?
More Linc books! I just finished work on the second book in the series, and I'm finishing the outline for the third. I'm having a blast.

The author has graciously provided a copy of DOUBLE VISION for one lucky reader! Just fill out the rafflecopter form below to be eligible to win. U.S. addresses only, please.
This giveaway will end on December 30th.
a Rafflecopter giveaway
Posted by Laurisa White Reyes at 6:00 PM