BOOK REVIEW: A LIGHT BETWEEN OCEANS by M.L. Stedman 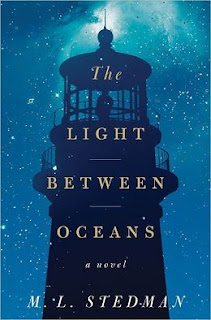 The debut of a stunning new voice in fiction— a novel both heartbreaking and transcendent After four harrowing years on the Western Front, Tom Sherbourne returns to Australia and takes a job as the lighthouse keeper on Janus Rock, nearly half a day’s journey from the coast. To this isolated island, where the supply boat comes once a season and shore leaves are granted every other year at best, Tom brings a young, bold, and loving wife, Isabel. Years later, after two miscarriages and one stillbirth, the grieving Isabel hears a baby’s cries on the wind. A boat has washed up onshore carrying a dead man and a living baby. Tom, whose records as a lighthouse keeper are meticulous and whose moral principles have withstood a horrific war, wants to report the man and infant immediately. But Isabel has taken the tiny baby to her breast. Against Tom’s judgment, they claim her as their own and name her Lucy. When she is two, Tom and Isabel return to the mainland and are reminded that there are other people in the world. Their choice has devastated one of them.


The Light Between Oceans is a beautiful, heart-wrenching story of desperate longing, of fierce love, of choice and sacrifice. On the surface it is a simple tale with no surprises, really. And yet it is so very complex, wrought with conflicting emotions and the consequences of decisions made all in the name of a love more powerful than fiction can normally convey.

The prose itself is as deceptively simple as the story, like looking at a painting that at first appears so effortless until you get up close and examine the intricate brush strokes. Stedman's technique is so flawless, in the language, the characters and story, that the author is completely invisible. I was so drawn into the story of these people, of this time and place, that I forgot it was a book I was holding instead of actual history. Even readers who might not otherwise be interested in historical fiction cannot help connecting with Isabel and Hannah and Tom and Lucy. Their story is one that will not be easily forgotten.  I give it 4 1/2 stars.

Violence:  Mild
Profanity:  None
Sex:  None
Posted by Laurisa White Reyes at 12:00 AM