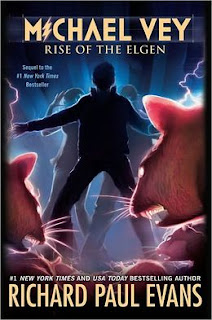 
Michael must save his mother—and protect his powers—in the electric sequel to the #1 New York Times bestselling Michael Vey, from Richard Paul Evans.

I rolled over to my back, struggling for breath. The pain continued to pulse through my body—a heavy throb followed by a sharp, crisp sting.

The man said, “Trust me, there are worse things in this world than Cell 25.”

Michael, Taylor, Ostin, and the rest of the Electroclan have escaped from the Elgen Academy in Pasadena and are headed back to Idaho to plan their next move. But what’s waiting for them there will change everything.

After using their wits and powers to narrowly escape an Elgen trap, a mysterious voice leads the Electroclan to the jungles of Peru in search of Michael’s mother. Once there, they discover that Dr. Hatch and the Elgen are far more powerful than anyone realizes; entire countries have begun to fall under their control. Only the Electroclan and an anonymous voice now stand in the way of the Elgen’s plan for global domination.

But is the voice that Michael is following really an ally, or is it just another Elgen trap?

RISE OF THE ELGEN is book 2 in Evans' Michael Vey series. I listened to both books on CD, and truth be told I wasn't too thrilled with book 1. (Read my review of MICHAEL VEY: PRISONER OF CELL 25 HERE.)I liked book 2 a little bit more. My biggest complaint about both books is that while they are listed as young adult titles for ages 12 to 17, the writing style, language, and behavior of most of the characters is more fitting for middle grade readers. In fact, I know a lot of 10 to 12 year olds who are big fans of the series.  Another complaint is that there are some things in the story that are just silly, such as "The Electro Clan" and how one teen character is always saying "Awesome!"  Electrified rats, an evil power-hungry villain, and the sometimes corny dialog was almost more than I could bear.

Now, having said all that, let me mention some of the positive aspects of RISE OF THE ELGEN. First, this book is action-packed from beginning to end. I admit that it held my attention and kept me guessing. One character, Zeus, who I thought was a bit overly dramatic in book 1, really developed into a heroic character in book 2. He became one of my favorites, in fact. There are a lot of characters to keep track of, but Evan's does a nice job juggling them all. I never felt confused, and no one got lost in the shuffle.  While the idea of electrified rats powering a city was a bit much for me to swallow, the actual scenes of them devouring bulls and even humans were intense and well-written. Yikes!

Finally, and what matters most, my kids liked both books. In particular, my 12-year-old son really got into the story and wants to listen to them again. So I guess Evans' has stumbled upon a story that has what it takes to entertain young readers. The end of book I really keeps you hanging. I guess that means there will be a book 3. And I guess I'll have to read it. I don't mind. It's getting interesting, and I hate to admit it, but I think I'm hooked.

Violence:  Moderate
Profanity: None
Sex:  None