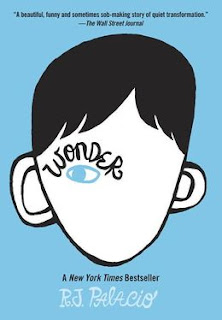 I won't describe what I look like. Whatever you're thinking, it's probably worse.


August Pullman was born with a facial deformity that, up until now, has prevented him from going to a mainstream school. Starting 5th grade at Beecher Prep, he wants nothing more than to be treated as an ordinary kid—but his new classmates can’t get past Auggie’s extraordinary face. WONDER, now a New York Times bestseller and included on the Texas Bluebonnet Award master list, begins from Auggie’s point of view, but soon switches to include his classmates, his sister, her boyfriend, and others. These perspectives converge in a portrait of one community’s struggle with empathy, compassion, and acceptance.

In a world where bullying among young people is an epidemic, this is a refreshing new narrative full of heart and hope. R.J. Palacio has called her debut novel “a meditation on kindness” —indeed, every reader will come away with a greater appreciation for the simple courage of friendship. Auggie is a hero to root for, a diamond in the rough who proves that you can’t blend in when you were born to stand out.

WONDER has been getting rave reviews, and I'm not going to disagree with any of them. This is a touching, heartfelt story you won't want to miss.
The book started off pretty simple. The first section is written from August's (the 10-year-old protagonist) point of view, so the vocabulary is childlike. At first glance this is a story about a boy and his experiences at a school, only August isn't like any other kid. He was born with a facial deformity and this is his first year at school after being homeschooled most of his life (due to numerous surgeries and other challenges.)

The points of view shift between several other characters including August's older sister, Via, and another boy at school, Jack. By the time the book ends, everyone has been changed for the better from knowing August. Nothing really shocking or surprising happens in this story, and yet somehow August changed me, too.

WONDER should be on the top of everyone's TBR list, especially school-aged kids, though teens and grown-ups will enjoy it just as much. It's a quick read with really short chapters, a small investment of time for a huge return.

Violence: Mild
Profanity: None
Sex: None