BOOK REVIEW: THE LIFE OF PI by Yann Martel 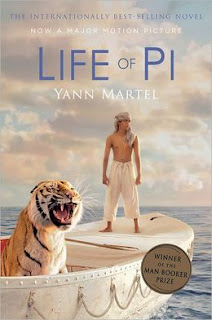 "A story to make you believe in the soul-sustaining power of fiction."—Los Angeles Times Book Review

After the sinking of a cargo ship, a solitary lifeboat remains bobbing on the wild blue Pacific. The only survivors from the wreck are a sixteen-year-old boy named Pi, a hyena, a wounded zebra, an orangutan—and a 450-pound royal bengal tiger. The scene is set for one of the most extraordinary and beloved works of fiction in recent years.

Universally acclaimed upon publication, Life of Pi is a modern classic.

I listened to an audio version of this book, and I'm so glad I did. The narrator's Indian accent made the narrator feel very present, as if he was speaking directly to me. This is one of those books that everyone seems to have read but me. I don't know why I waited so long. Probably because of the mile high TBR stack on my shelves. Thank goodness for Audible.com.

In any case, THE LIFE OF PI is one of the most awe-inspiring tales I've ever come across. I haven't seen the movie yet, so I'm speaking solely of the novel. The descriptions were so vivid, so detailed and the narrative so truthful, I could have sworn this was non-fiction.

For those of you who may  not have read it yet or seen the movie, here is the premise in a nutshell. Pi is an Indian boy and the son of zookeeper. When his parents sell the zoo and decide to immigrate to Canada, most of the animals are sold off. Some are put on a cargo ship along with Pi and his family to be distributed among zoos in America. The ship sinks and Pi is the sole human survivor. He ends up sharing a life boat with the only other survivor: a full-grown Bengal Tiger named Richard Parker.

At first glance, this story seems far-fetched, and that's precisely what some people think when Pi relates his adventures at the end. But the particulars of this story are so well researched that it is actually plausible. It is so...believable! I loved the audio so much I went out and purchased a paperback copy of the book -- at full price! Just so I could share it with others and have it on my shelf.

If you haven't read THE LIFE OF PI yet, I urge you to put down whatever you're reading now and pick up Martel's masterpiece.

While this book is considered Young Adult, I would venture to say it might be appropriate for upper middle grade readers, too. The vocabulary is a little mature, but the story would definitely capture younger imaginations. My ten and twelve-year-olds were mesmerized by it. There are some violent scenes of animals eating one another, which is why I wouldn't suggest this for younger audiences. But otherwise, it's a terrific adventure for maybe ages 10 & up.