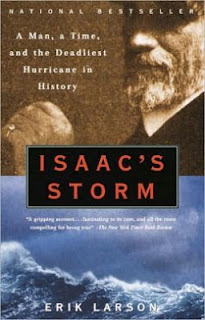 
At the dawn of the twentieth century, a great confidence suffused America. Isaac Cline was one of the era's new men, a scientist who believed he knew all there was to know about the motion of clouds and the behavior of storms. The idea that a hurricane could damage the city of Galveston, Texas, where he was based, was to him preposterous, "an absurd delusion." Galveston would endure a hurricane that to this day remains the nation's deadliest natural disaster. In Galveston alone at least 6,000 people - possibly as many as 10,000 - would lose their lives, a number far greater than the combined death toll of the Johnstown Flood and the 1906 San Francisco Earthquake. Meticulously researched and vividly written, ISAAC'S STORM is based on Cline's own letters, telegrams, and reports, the testimony of scores of survivors, and our latest understanding of the hows and whys of great storms. It is the story of what can happen when human arrogance meets nature's last uncontrollable force. As such, ISAAC'S STORM carries a warning for our time.


I've been a fan of Erik Larson ever since I read DEVIL IN THE WHITE CITY about seven years ago. Larson is the master of narrative non-fiction, and ISAAC'S STORM is one of his best. The true tale of one of the most destructive hurricane's to ever reach American shores, this book chronicles the tragedy that claimed more than 6,000 lives in Galveston, Texas in September 1900. More compelling and heart wrenching as any fiction novel I've read, ISAAC'S STORM hooked me like few books ever have before. I knew I wanted to read it again before I even reached the last page.  If you are not a fan of non-fiction, please consider giving this or any of Larson's books a try.