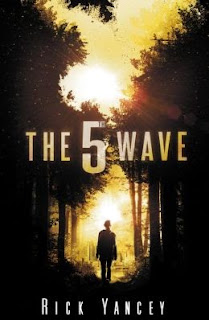 Now, it's the dawn of the 5th wave, and on a lonely stretch of highway, Cassie runs from Them. The beings who only look human, who roam the countryside killing anyone they see. Who have scattered Earth's last survivors. To stay alone is to stay alive, Cassie believes, until she meets Evan Walker. Beguiling and mysterious, Evan Walker may be Cassie's only hope for rescuing her brother—or even saving herself. But Cassie must choose: between trust and despair, between defiance and surrender, between life and death. To give up or to get up.

I know THE 5TH WAVE got rave reviews, but I can't help but wonder if those reviews would have been equally radiant had the author been an unknown instead of the very popular Yancey.  I absolutely loved, loved his book THE MONSTROMOLOGIST and really expected great things from this science fiction tale about  a couple of kids who are remnants of the last surviving humans after an alien race wipes them all out. But what I found was a re-mix of Stephanie Meyer's THE HOST and a juvenile version of G.I. Joe.

The story is told primarily from two perspectives, Cassie and Ben. Now, I will admit that Cassie's story was pretty compelling. I enjoyed her narrative immensely, as well as her romantic interest in Evan, the maybe-he's-an-alien-maybe-he-isn't hero. I think if the entire story had been written from her point of view I would have enjoyed it much more. Ben's story was a little too military-heavy for me to get into it completely. Many of his chapters were just a tad boring.

The overall premise of the novel is not an uncommon one. Aliens want Earth for themselves and go about killing all the humans. The main thrust of the plot is that Cassie gets separated from her little brother and spends the entire novel searching for him. Some positive aspects of the book, and what kept me reading, were some nice little plot twists which were, while a tad predictable, interesting and engaging. The best part of the novel was the last scene where the good guys try to escape from the bad guys. Can't say more for fear of spoiling it, but it is a pretty darn good action scene.

Sorry I didn't have more enthusiastic things to say about THE 5TH WAVE. But I do highly recommend his Monstromologist series. And if you really want some good sci-fi, read THE HOST and ENDER'S GAME.