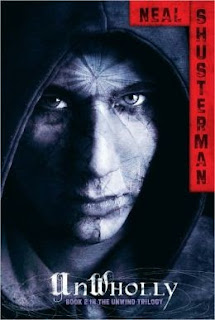 
Thanks to Connor, Lev, and Risa—and their high-profile revolt at Happy Jack Harvest Camp—people can no longer turn a blind eye to unwinding. Ridding society of troublesome teens while simltaneously providing much-needed tissues for transplant might be convenient, but its morality has finally been brought into question. However, unwinding has become big business, and there are powerful political and corporate interests that want to see it not only continue, but also expand to the unwinding of prisoners and the impoverished.

Cam is a product of unwinding; made entirely out of the parts of other unwinds, he is a teen who does not technically exist. A futuristic Frankenstein, Cam struggles with a search for identity and meaning and wonders if a rewound being can have a soul. And when the actions of a sadistic bounty hunter cause Cam’s fate to become inextricably bound with the fates of Connor, Risa, and Lev, he’ll have to question humanity itself.

Rife with action and suspense, this riveting companion to the perennially popular Unwind challenges assumptions about where life begins and ends—and what it means to live.

Unwholly is book 2 in Shusterman's Unwind Dystology Series. I absolutely loved Unwind, which was gripping and creepy in all the right ways. So I had high expectations for its sequel. Unwholly fully met and exceeded those expectations. It was a bit dizzying trying to keep track of the 8+ points of view -- yes, 8! (Possibly more. I lost count.) But once I became familiar with each distinct character,  I got sucked into the story and quite literally could not put the book down.

My favorite character was Cam, a living composite of a hundred unwound kids. A modern-day Frankenstein's monster, only Cam is no monster, which is part of the problem. Is he just an expression of the many brain and body parts that have been used to create him, or is he his own unique individual?

The Unwind books explore the value of life in all its forms without apology. Unwinding became legal as a compromise between pro-choicers (abortion) and pro-lifers during the Heartland War. It also was a way for society to "deal" with rebellious teenagers. Unwind and Unwholly reveal the humanity of every individual and the price we pay as a society when we undervalue any person for any reason. There is even a brief mention of a boy who is the son of an illegal immigrant, a reference to the current immigration debates so prevalent in the southwestern states where Unwholly takes place.

Fans of dystopian fiction will love this series, but so will anyone who enjoys books with plenty of action and the struggle to discover what it means to simply be human.

I'm thrilled to announce that book 3 in the series, Unsouled is now available! Whoo hoo!

Read my review of Unwind HERE.

Profanity:  None
Violence:  Moderate
Sexuality:  None